We Are The 28 - Off The Ledge: Crisis Negotiator Justine Harris

During the Act 10 protests of 2011, crisis negotiator Justine Harris was called to the State Capitol for a man on a ledge, threatening to jump. In front of a sizeable crowd, she, fellow negotiator Julia Helbach, and Capitol Police joined efforts to convince the man to move to safety. "We had just gotten to the point where he was listening," Detective Harris recalls. Then a member of the crowd started shouting, saying that police were lying and the man should not trust them. Despite the interjection, Detective Harris was able to successfully keep the man talking and buy time, until Capitol Police could sweep in and bring the man off the ledge.

The remarkable part is, that is only one part of Justine Harris's workload at MPD. She is assigned currently to the Violent Crime Unit, investigating homicides, attempted homicides, and pattern violent crimes. Prior to being a detective, Justine worked west patrol and then was Neighborhood Officer for Bettys Lane, Theresa Terrace and Hammersley Road. Justine's ties to the neighborhood ran deep; one family often struggled with affording school supplies and winter coats. Justine worked closely with the children's school and family to meet those needs.

Detective Harris calls her transition to MPD a "mid-life career switch." She previously taught middle school and high school English in St Louis, oversaw youth programming at Briarpatch, and worked for United Way. Justine was hired into the 2005 MPD Academy, inspired to apply after meeting some Madison Police Officers who served on various boards. Despite breaking her leg the week before the Academy started – and having two grade school aged boys – Justine completed the Academy. Fifteen years later, she's a detective with an always-present cell phone: her 7 year old son may call, or an incident might occur in which she is needed to negotiate. Detective Harris is prepared for both. 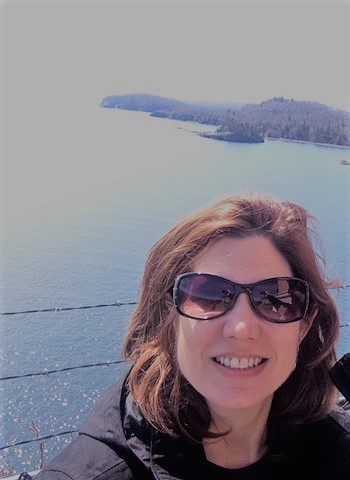