We Are The 28 - Renaissance Woman: Crisis Negotiator Lindsay Kamnetz

It's a Thursday in late winter, and Officer Lindsay Kamnetz finished her overnight patrol shift at 7AM. Most who work "graveyards" rush home to go to bed as close to dawn as possible; then again, most people aren't Lindsay. She instead had an 8:00am academic advisement appointment, another step toward her master's degree in library science. We talk afterward, and nothing in Lindsay's voice would lead a person to think she's been up all night.

Officer Kamnetz has always gone her own way. At 14, she took up fencing, which she pursued into her freshmen year at UW-Madison. "I was overambitious" Lindsay laughingly recounts about her early college days. She was a walk-on to the crew team, fenced, joined the Forensics Team, and wanted to go to law school. Fencing and crew fell away so she could pursue a degree split amongst her multiple interests: history, political science, and Spanish. Lindsay graduated college and went to work at the Wisconsin State Legislature for Tom Larson of the 67th Assembly District. While engaged in that work, she enlisted as well in the Army National Guard, undergoing boot camp at Fort Jackson then attending the prestigious Defense Language Institute in Monterey, CA.  Lindsey next underwent intelligence school at Goodfellow Air Force Base in Texas.

Officer Kamnetz is proficient in Persian-Farsi and Persian-Dari, and after 6 years as a cryptologic linguist she is now a cyber operations specialist. At MPD, she's a South district overnight patrol officer, a crisis negotiator, and a member of the drone team. What does a person with 2 critical service careers do in her free time? Lindsay is a pit bull mom to Lola, a "diva" from PAWS Chicago, and Vinnie, rescued from a dog fighting ring through Cry for Help Rescue of Illinois. 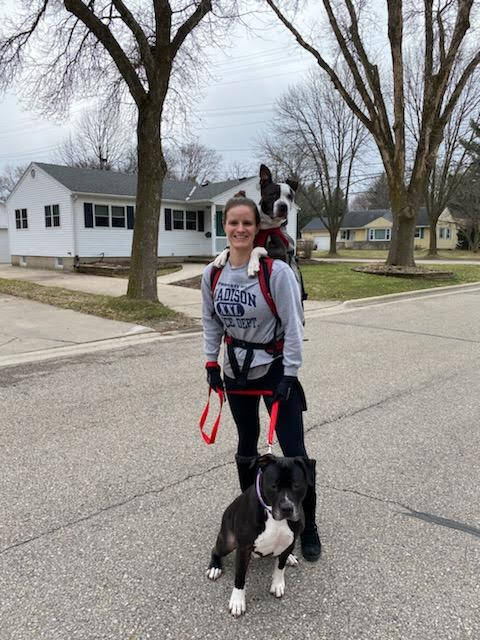