A Tale of Two Spokesmen

A Leap of Faith: DeSpain reflects on career, MPD family

"You know, they are going to civilianize that PIO job, you should think about." As soon as the veteran MPD detective had uttered the words, he walked away, leaving me to think about life and where I was headed.

It was early 2007, and the conversation had taken place outside of the City County Building coffee shop, where I encountered many news sources while working the beat for WISC-TV.

Journalism had been my first professional love, having watched with great interest, the Watergate hearings back in middle school, and thinking what an important and honorable way that must be to make a living.

So it had been for 25 years at Channel 3. Never thought I would leave it, but this was a moment where a leap of faith might be in order. I had two young children and there was noise in the newsroom system about moving me to the night side, meaning not much dad time.

Having marched around the Randall Elementary School playground, mimicking college students who were up the street protesting the Viet Nam War, my mindset on policing began evolving a few years prior when I first interviewed MPD Chief David Couper. He might have been wearing clogs, and I remember photos of Martin Luther King Jr. and Gandhi hanging above his desk. I was learning about the difference between guardians and warriors, about how trust-based and community-based policing can really work.

I took that leap of faith, becoming the first civilian MPD PIO. I was now living life on the other side of the camera. There was a learning curve, no doubt, but my instincts regarding the men and women of the MPD had been correct, and in time I was accepted as a member of a tremendous family.

Now that I prepare to turn the page, check out life's next chapter, it will be work relationships with a diverse and eclectic group of caring professionals that I will be truly miss. 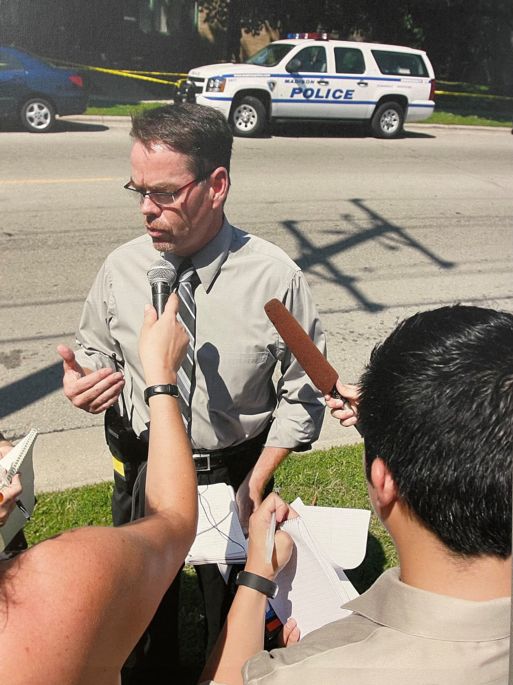 Getting Social with Tyler Grigg

Tyler Grigg has one of the longest titles at MPD (Crime Prevention, Crime Stoppers, and Social Media Coordinator), and that speaks to the volume of roles he has undertaken. He is responsible for MPD's social media content on Facebook, Twitter, and Instagram.

Tyler is the voice you may hear on the radio, announcing when local law enforcement is looking to identify individuals associated with some type of crime. He records and produces Crime Stopper radio ads and sifts through anonymous tips, liaising with not only MPD investigators but also various other Dane County law enforcement officials to solve active investigations.

You may also see Tyler at the Training Center, as he is an adjunct instructor for both the pre-service academy and the Department's annual in-service trainings, as a Master Instructor Trainer for Firearms, and a state certified instructor for DAAT, Tactical Response, and Scenarios. He has been with MPD since 2009.

On January 4th, 2021, Officer Grigg will hand in his badge and will step into a new, yet somewhat familiar role, joining the civilian ranks and taking the reins as Public Information Officer. 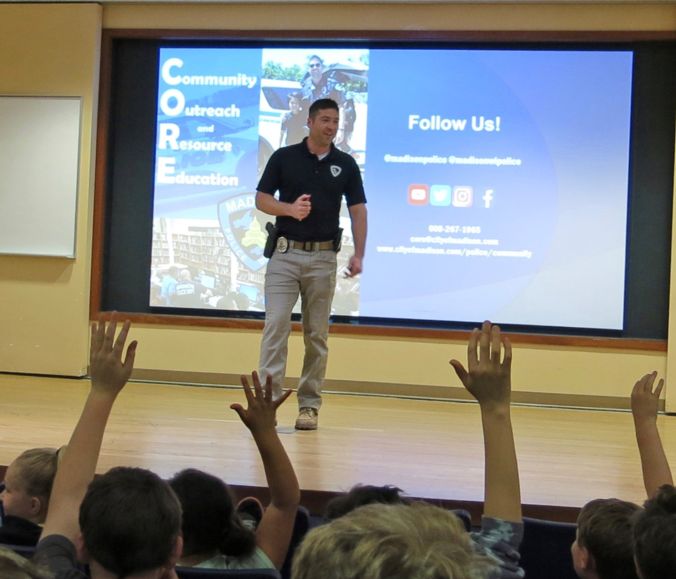 Listen to Joel and Tyler on the latest MPD Podcasts:

After more than 13 years, and four police chiefs, MPD PIO Joel DeSpain has decided to call it a career at the end of the year. In the podcast, Chief Victor Wahl turns the tables, asking DeSpain about the trials and tribulations of dispensing information. DeSpain, a former journalist, talks about the transition from reporter to news source, and how both of his chosen professions have drastically changed.

Following a nationwide search, the Madison Police Department found the best candidate to take over the public information office close to home. Really close to home. Tyler Grigg is currently a police officer with the MPD, and in a sense, has been a PIO in training for many years. On the podcast, current PIO Joel DeSpain and Acting Chief Vic Wahl introduce us to Grigg, as Grigg prepares to turn in his badge, and DeSpain readies for retirement. Chief Wahl is also gearing up to step aside as the Department's chief. He initially thought he'd hold the title only a few months. Now 16 months later, he reflects on what it has been like leading the MPD through an unprecedented year.