Every year, MPD recognizes our people--civilian and sworn--and citizens whose actions and work went above and beyond.  2020 was no exception, and during the pandemic and the tumult of the protests, Midtown officers were involved in several major incidents, during which they demonstrated heroism and courage, and represented core values of MPD including service, recognizing human dignity, and leadership.

Importantly, many other MPD officers, civilian employees, and citizens received awards for a variety of actions and efforts, but I want to highlight those major incidents involving members of my team.

To provide some background, I will provide a description of each event adopted from our Awards Program:

Garner Park:  Officers were monitoring Garner Park on August 4, 2020, due to concerns about a large event related to the loss of a community member's life earlier in the year. At approximately 9:07 p.m., reports were received of gunfire coming from the park. MPD personnel who were the first on scene observed muzzle flashes of people shooting in their general direction while the large crowd began to disperse in all directions.   Other officers responded and started to work their way through the area. Some members of the crowd were hostile and people were running in all directions, which made locating and securing a scene very difficult. This call resulted in two suspects taken into custody, two victims with gunshot wounds, three recovered firearms and approximately 66 spent casings and 65 unfired rounds being recovered. Our personnel all responded heroically to a stressful and chaotic situation. Leadership skills were top notch and allowed for the officers to respond safely, deliberately and methodically. They are all deserving of and being awarded with a Meritorious Conduct Award.

Park St:  Officers responded to a report of a female being physically assaulted on July 30, 2020. As the first responding officers arrived on scene, an armed male suspect was observed holding a female. The suspect refused to listen to officers' commands. The suspect moved around and used the female victim as a shield. Officers attempted to continue to dialogue with the suspect. A plan was developed to deploy less-lethal tools in order to take the suspect into custody. The suspect was ultimately taken into custody and the female victim was freed from the suspect. This was an extremely dangerous highly fluid situation. The actions and efforts by all the officers involved resulted in the female's life being saved and a dangerous suspect arrested through their bravery, teamwork, excellent planning and leadership, quick thinking and efforts. They are each deserving of and receiving a Meritorious Conduct Award for their actions and service.

Hospital:  On November 24, 2020, officers responded to a local hospital regarding a subject holding two knives to his neck. An Officer was tasked with making verbal contact with the subject. The Officer started a dialogue with the subject and listened to the subject, explained what was going on, built rapport and subsequently asked him to put down the knives. The subject ultimately listened to the commands of the Officer and dropped both knives. The subject was able to be taken into custody safely. The Officers' actions and professional communication skills resulted in a safe and positive outcome of what was a very dangerous situation. His actions are being commended with a Meritorious Conduct Award.

Due to the pandemic's ongoing restrictions, MPD was not able to hold our annual awards ceremony this year.  However, Midtown personnel and families recently met at our station to recognize and honor these heroic officers.   Below are some photos from our ceremony.  Please join me in thanking these officers for their heroic service to our community.  I have no doubt that their actions saved lives and protected the community from further harm. 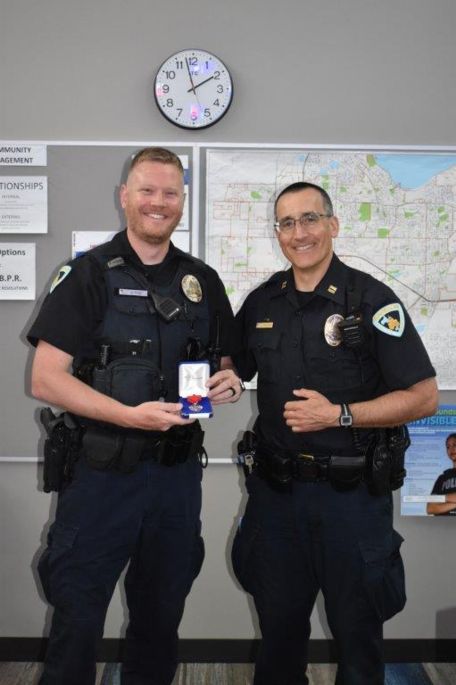 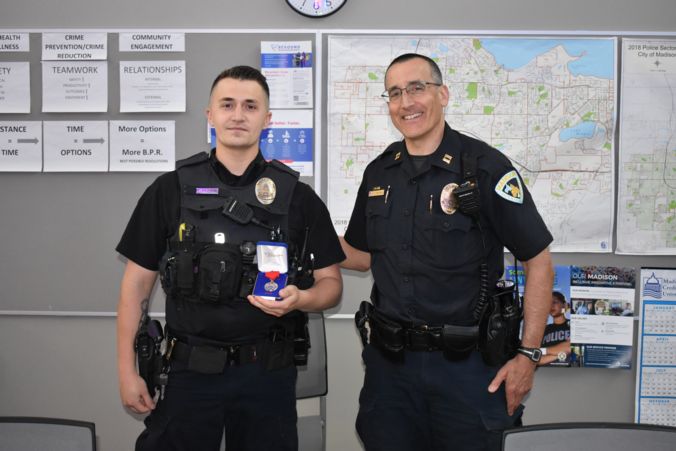