For the past two Tuesday afternoons, Brittingham Park at 700 W. Washington Avenue is now the scene of a new event drawing more people into this beautiful setting on Monona Bay.   Bayview-Braxton Neighborhood Officer Kim Alan over the past several months has worked with "Triangle" residents, staff from Madison Parks and CDA and many others, to organize a weekly "Farmers Market" at the Brittingham Park Shelter.   Last week, I had a chance to stop down myself and will give a short review here on our blotter.  First of all, "Mary" from the Zuzu Cafe on Drake Street passed out samples and recipies on how to prepare "rhubarb crisp" which was I must say simply fantastic.  The first sample was so good I had to try a second just to confirm the first one was as good as I thought it was.   I then made my way through the vendors and walked away with spring greens, fresh "kale" for my morning smoothies, and finally some fantastic asparagus which was used as a side for a venison tenderloin.   Overall, this police captain's critique is giving "high praise" for the new Brittingham Park Farmers Market.

The market will run every Tuesday afternoon from 3p-6p throughout the summer.  If you live in the area, or work downtown and your commute takes you past Brittingham on Tuesday afternoons, please make a point to stop down and check this out.   Kudos to Officer Kim Alan and everyone who has helped bring this to fruition !!! 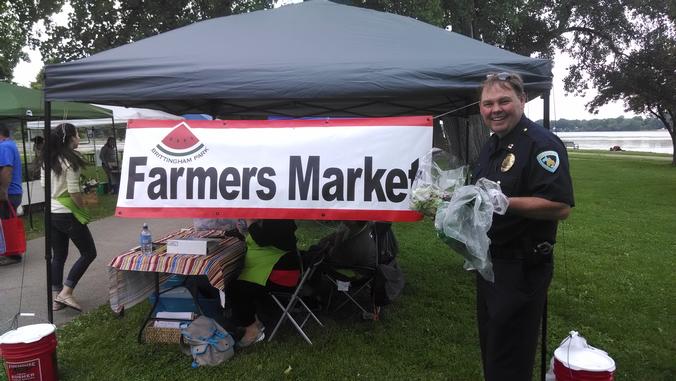 Captain Joe with his collection of goodies from last week's Brittingham Farmers Market.