Some of Madison's smallest residents took pictures, received cards and pet two of Madison's largest officers Wednesday afternoon in the parking lot of the Bayview Community Center in the Triangle Neighborhood of Madison.


The mounted patrol teams pictured are, starting from the left, Ofc. Sarah McLaughlin and her partner Luna and Ofc. Ken Mulry and his partner Bubba. 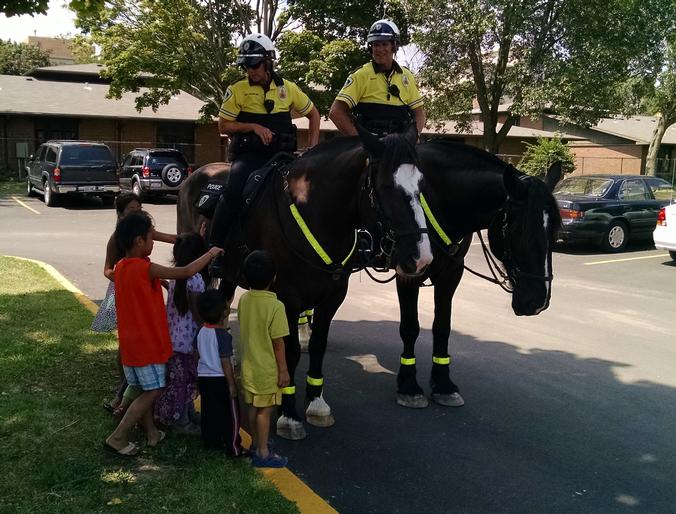 There are two full-time and two part-time officers and five horses in the Madison Police Mounted Unit. One horse is privately owned by an officer and four are owned or leased by the department. They work major Madison events such as the Mifflin St. Block Party, Fourth of July's Rhythm and Booms, Taste of Madison and the late night entertainment district downtown.

In addition to their patrol shifts downtown, the mounted patrol unit works in neighborhoods, bike path areas and parks across the city on a regular basis. Covering a variety of shifts, the mounted unit can provide high visibility patrol to areas not easily reached by squad or bicycles and can provide quicker response than officers on foot. The heightened vantage point and the ability to navigate through rough terrain is a perfect job for the mounted patrol unit during search and rescue efforts.