Hot on the Trail 5K 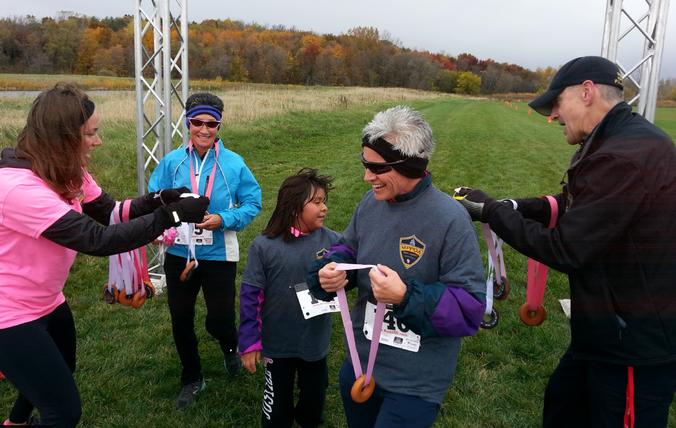 The Madison Professional Police Officers' Association hosted its inaugural Hot on the Trail 5K and Kids Donut Dash this past Saturday, October 18. Playing on the stereotype of "cops and donuts" – and with the help of East District Officer Emily Samson – the Association set up this event in conjunction with the community to help raise money for a local charity.

The event was held at Door Creek Park on Madison's eastside, with 140 participants. A set of Madison Police officers volunteered to be the "bad guys" during the 5K and it was the runners' job to pursue them through the race. Children who were 10 and under could join in the fun with the Kids Donut Dash, which had them running around to collect donuts.

Proceeds from this event were given to Agrace Hospice and Palliative Care. This organization was chosen because last year, a member and friend of the MPPOA, Sergeant Karen Krahn, used their services at the end of her battle with cancer. Fellow members of the MPPOA knew how much policing and the Madison Police Department meant to Sergeant Krahn, so they wanted to bring everything MPD right to her room. Agrace was always willing to work with the officers and allowed them to bring things like MPD K-9s, motorcycles, and even horses directly to her. It's Agrace's amazing care and willingness to welcome all of these accommodations that makes this an organization that the MPPOA wants to recognize and donate to.

"The participation in our inaugural event exceeded my expectations! It was thrilling for me, as a member of the Madison Professional Police Officers' Association, to see the response from my coworkers, their families and friends, and active community members, who showed up to support Agrace Hospice and MPD. It wouldn't have been possible without donations from Metro Market, Cargo Coffee, Culver's, and Greenbush Bakery.  We are already dreaming of bigger, better things for next year's race!" - East District Officer Emily Samson

For more pictures of the event, please check out the Madison Police Department Facebook page.