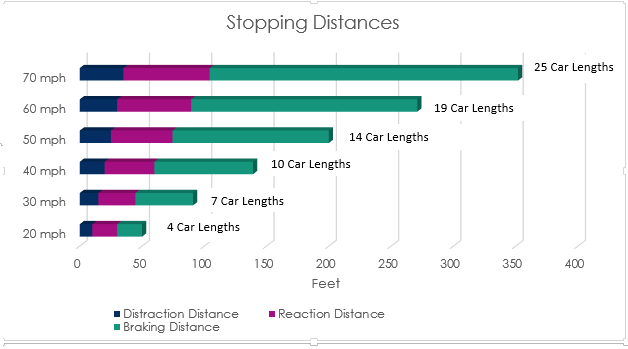 We have all seen that vehicle racing down the road that just makes us shake our heads at how fast they are going, knowing that it is extremely unsafe. According to the National Highway Traffic Safety Association (NHTSA), an average of 1,000 Americans are involved in fatal car accidents each month in which speed is the leading factor. Speeding is the third leading cause of all traffic accidents, yet about two thirds of drivers admit to driving above the posted speed limit on a regular basis (Parker-Poke, 2008).

When many people think about speeding, their main concern is usually about getting caught by the police and having to pay a ticket. In addition to paying the ticket, your insurance is likely to increase, as well. Besides tickets, speeding is also going to cost you more at the gas pump. The NHTSA tells us that fuel consumption significantly increases as a car goes above 45 mph. A car or small truck will use about 50 percent more fuel traveling at a speed of 75 mph than 55 mph.

Even though there are legal risks and increased finances, the greatest risk of speeding is to the driver's safety and everyone else in the car or on the road. As a driver increases their speed, they are also increasing the amount of time and distance it would take them to come to a safe stop. A person would logically deduce that if your speed has doubled, then so has your stopping distance. On the contrary, if your speed increases from 30 mph to 60 mph, the distance needed to come to a safe stop is now four times greater. You go from needing 75 feet to stop to 240 feet to stop. Calculated into these stopping distances is not just the amount of time the car takes to come to a stop but also thinking distance. This is the amount of time it takes the brain to register brake lights and move their foot to the brake pedal.

Speed limits are calculated with stopping distance in mind and are often based on the area in which one is driving. When you exceed the speed limit, you're not just at risk for getting pulled over, you are also putting yourself and everyone around at a greater risk of being in an accident. Speed enforcement is about traffic safety for all drivers on the road.

Dangers of Speeding While Driving