Corporal Punishment: What the Research Reveals

Even though public approval is still high and there are acceptable legal standards for what types of physical punishment are suitable, research continues to raise concerns that this punishment can be detrimental to a child's mental and psychological health. Parents can still choose to use corporal punishment; hopefully the resources referenced in this blog can help them make an informed choice. 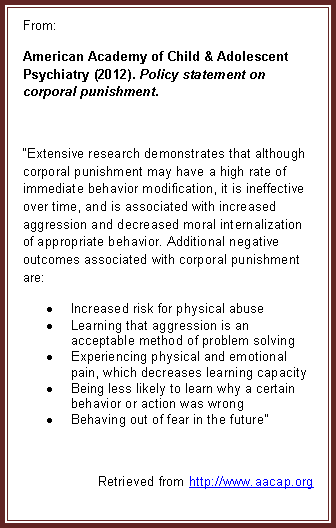 Researchers have found that a common misconception made by parents is that physical punishment is equivalent to correcting unwanted behavior (Gershoff, 2008). In reality, physical punishment leads children to fear adults, as opposed to respect them. Studies have shown that pain and fear interfere with the message the parent is trying to get across. Physical punishment teaches children that violence is the way to correct unwanted behavior and cope with a situation that is not going their way. Though parents use this practice to make their children behave, research has found that it does the opposite. Children who are physically punished are more likely to become aggressive and are more prone to antisocial behaviors, which tend to follow them into adulthood (Gershoff, 2008).

Altering parents' use of physical punishment is not as simple as throwing out statistics and research studies. Changing the perception of physical punishment is difficult because the practice is often rooted in family and faith traditions. The best way to counteract this phenomenon is to teach parents alternatives for discipline that are less harmful and more productive. Below, you will find resources parents can use to learn about alternatives to corporal punishment.

We all want what is best for our kids and to teach them the skills they need to be successful in life. When looking to discipline or correct your child's behavior, consider alternatives to corporal punishment.

Gershoff, E.T (2008). Report on Physical Punishment in the United States: What Research Tells Us About Its Effects on Children. Columbus, OH: Center for Effective Discipline.