Each year in early June, the Madison Fire Department brings together several different agencies, both public and private, who respond to emergencies.  The goal of the event is to educate persons from all age groups on how to make safe decisions, prevent injuries, and to take advantage of safety equipment like bike helmets, smoke alarms, etc.

For a number of years now, South Madison has held their own "Safety Saturday" event at Penn Park.  This year, the South Police District partnered with two local organizations, (Penn Park Partners and Today Not Tomorrow), to organize the event held throughout the day on Saturday, June 9th.  The Madison Police and Fire Departments were present to show off our emergency vehicles (fire truck, ambulance/medic unit, squad car).  The MPD Mounted Patrol Unit was also in attendance.  Also present at the event was the Dane County Humane Society who has been actively involved in South Madison all year promoting animal registration, vaccination and getting pets spayed or neutered.

A first for this year's event was combining "Safety Saturday" with the Urban Leagues "summer camp sign up day."  The Urban League had intended to hold their sign up event on this same day.  After some e-mails and phone calls, the two events were combined.  So for those youth in attendance, they had the opportunity to review summer camp possibilities with the Dane County YMCA, the Boys and Girls Club and Centro Hispano.  According to South Metropolitan Planning Council Chair Sheri Carter, "combining the two events was a huge success."  According to Carter, more than 100 persons attended the Penn Park Safety Saturday event.

One thing we know at the South District, if kids are busy with positive activities during the summer, they have far less time and energy to get involved in "not so positive" activities.  A big "thank you" to all who made Safety Saturday at Penn Park such a great event this year !!! 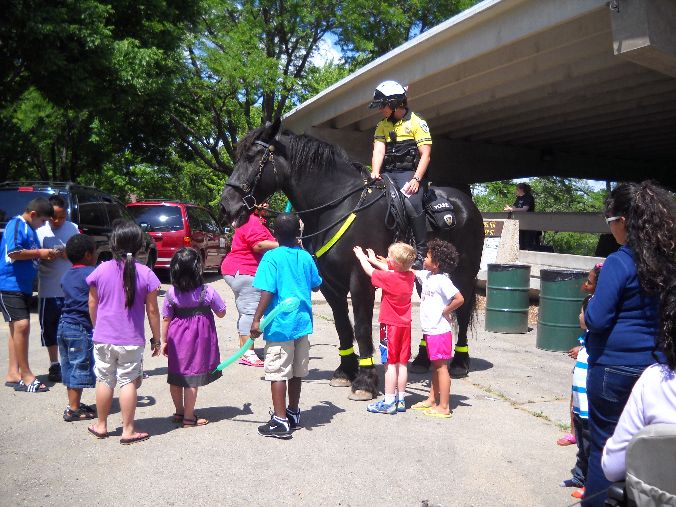