Welcome to the late spring edition of the South District newsletter.  The weather has been fantastic the past three months, and all of our neighborhoods have been busy and active across the city.  In late April and early May, we had a series of violent incidents take place, including a shooting at Penn Park.  However, as of today we have taken into custody the majority of those suspects on a variety of charges, and currently working with the District Attorney's Office and the U.S. Attorney's Office to make sure each suspect is appropriately charged so maximum sentences can be imposed.   As Chief Wray stated during a news conference in mid May on the recent spree of violence, what has kept Madison a strong, safe community for many years is the fact that we simply will not accept any violent behavior which endangers the lives of others, particularly when it endangers uninvolved citizens who may be at home or in a public space.

I believe there are several other reasons as well which keeps Madison  a safe community.  I will mention two here.  First, from Mayor Soglin's Office to the Common Council and throughout each City agency, there really is a tremendous commitment to high quality public service here in Madison.  Many years ago, Mayor Soglin introduced the idea of "Neighborhood Resource Teams" (NRTs).  In short, City staff meeting regularly with other City staff to talk about what they are observing taking place in specific neighborhoods across the City.  Mayor Soglin initiated NRTs back in the early 1990's when I sent him a letter, while serving as the Broadway Simpson Neighborhood Officer questioning him why I was seemingly the only public servant on the "front lines" of a neighborhood which was truly in crisis.   Today, we no longer have whole neighborhoods like Broadway-Simpson with a high concentration of crime and problems, but we certainly have similar problems, less concentrated, in larger areas of the city (more spread out).   Upon his election, Mayor Soglin re-instituted the NRT's last year, and MPD staff are at the table with other city staff doing what we can to preserve and maintain a safe and healthy neighborhoods.

The second reason I believe why Madison remains an overall safe community can be attributed to the many local non-profit agencies we have at work here in the Madison area.   Since the mid 1990's, I have been assisting the Dane County United Way as a member of different committees which provide oversight to how over $7,000,000 are awarded each year to fund variety of programs at local non-profits.   Here in the South District, we have numerous non-profits that open for business everyday dedicated to helping all, young and old, from basic needs (food, shelter) to personal growth and development (job training, etc).  Madison Area Urban Ministry, Urban League, Centro Hispano, Dane County Boys and Girls Club, Omega School, Multi-Cultural Catholic Center, Goodwill just to name a few, and those are all a block or two away from each other on lower S Park Street.  We also have a large number of households and persons in the Madison area, who provide financial support or community service through civic clubs that further help support our non-profit sector here in Madison.   Over the past several years, I have been an active member of the Madison South Rotary Club serving as president of our Foundation Board.  Each UW-Football Saturday, MSR club members can be found at Rotary Park, 1400 Monroe Street, operating our "Brat Stand" before each home game.  Over the course of a typical UW football season, we make enough money to write over $50,000 in checks to local non-profits here in South Madison.   So when I sit back and think about what keeps Madison safe, our philanthropic efforts, community service and ultimately the dedication and time of our non-profit agencies is without doubt a big reason why we continue to keep Madison a great place to live, work and play. 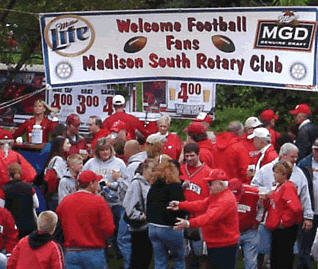