Team Madison Police is preparing to again travel the "Road To Hope," a 250 plus mile fundraising and memorial ride that culminates in Washington, D.C. from May 10-12.

The ride, organized by Law Enforcement United (LEU) a charity that supports Concerns of Police Survivors (COPS) and the Officer Down Memorial Page (ODMP), involves two routes along which memorials for fallen officers and their families are honored. One route begins in Reading, PA and another begins in Chesapeake, VA with both finishing at the Jefferson Memorial this year. Last year's ride finished at the White House.

"During the ride, there are many rest stops," said Lt. Kelly Donahue, a rider and Madison Police officer. "Many of these stops, or often the path that we take, is in order to remember and honor a particular officer. Whether it is riding by a memorial in a park, a stop at a department that has lost an officer or a family greeting us, it is a constant reminder of why we do what we do."

"We have eight members that are Madison Police officers, one officer who is also a family member of a fallen officer and a Department of Justice employee on the team," said Lt. Donahue. "There are six signed up as bicycle riders and four as support members."

Lt. Donahue said last year Team Madison Police donated approximately $8,000 to Law Enforcement United which in turn donated $145,000 to COPS entirely funding the COPS Kids Summer Camp, according to Nicole Chadwick, marketing director for LEU. The camp, held in East Troy, Wisconsin since 2003, serves the children and family of officers killed in the line of duty.

"(LEU) also donated $85,000 in 2012 to the ODMP that covered the mobile web site, the ODMP K-9 Memorial, the No Parole for Cop Killers campaign and line of duty death notifications program," Chadwick said.

As a fairly new team, Team Madison Police is still cultivating interest and getting the word out in the community, according to Donahue. For 2013 the team has a goal of raising $13,000.

Three female riders and three female support team members make up a majority of Team Madison Police, according to Lt. Donahue, which helps the team connect with the many female surviving family members of fallen officers.

"Because policing is a male dominated profession, and most officers killed are men, most of the survivors at camp are women accompanying their children," she said. "The response that we get from girls and female survivors is unbeatable. They tell us not only how much they appreciate what we are doing, but how they can't imagine doing what we do.  I tell them I can't imagine surviving what they have survived and that they are the ones we should be amazed by."

In the future, Lt. Donahue hopes the team will continue to grow. "We would love for the opportunity to partner with some other area law enforcement agencies or even have more members join the team. To the best of our knowledge, there is only one other law enforcement officer from Wisconsin that is a member of Law Enforcement United." 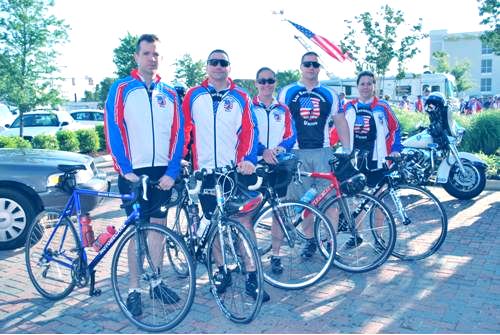 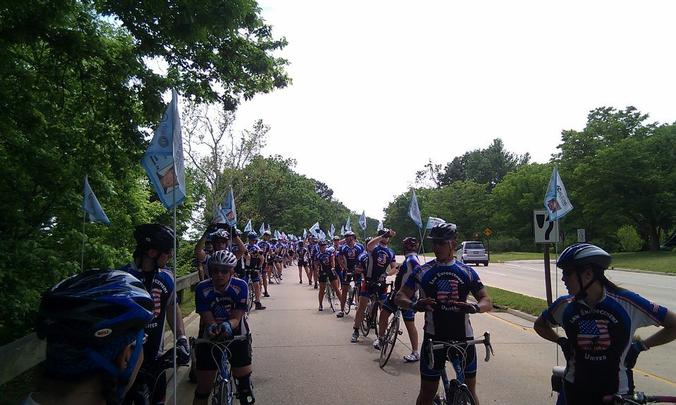 During the last leg of the 2012 ride in Fairfax County, VA, the Law Enforcement United riders pause as they prepare to ride into Washington, D.C. with their flags memorializing fallen officers displayed.