On Tuesday evening, April 30th, over 40 persons who own or manage rental property in South Madison met with City of Madison staff at the Bonfyre American Grill, 2601 W Beltline Highway.  The meeting was organized and facilitated by the MPD's Arbor Hills - Leopold Neighborhood Police Officer Deon Johnson.  Linda Horvath and Craig Wilson from the City's Planning Department met with the group to dicuss the availabilty of low interest loans in specific neighborhoods which could be used to repair, improve and upgrade rental housing in the area.  This new program came about as the result of a recently completed two year comprehensive plan which was developed for the Leopold and Arbor Hills neighborhoods (and to be adopted by the Madison Common Council later this summer). This topic generated signficant interest and discussion by those present.  Horvath and Wilson agreed to meet again with the group in the near future to share a more detailed plan as to how rental property owners can apply for these new funds, when the funds will be available, and the criteria to be used by City staff in awarding the funds.

In the second half of the meeting, South District Captain Joe Balles presented an overview on recent crime trends and general safety.  Statistics were presented showing city wide historical trends and how the South Police District sectors have compared to other districts elsewhere in the city.  Crime city wide decrease slightly from 2011 to 2012.  The South District has seen a similar trend.  A number of South Madison neighborhoods (Arbor Hills, Leopold, Burr Oaks, Brams Addition) have seen signficant decreases in crime over the past two years.

Officer Johnson concluded the meeting by thanking everyone for attending and announcing two or three addional meetings would be organized in 2013.

The South District would like to extend a big thank you to Bonfyre for hosting this community meeting and serving up some refreshments. 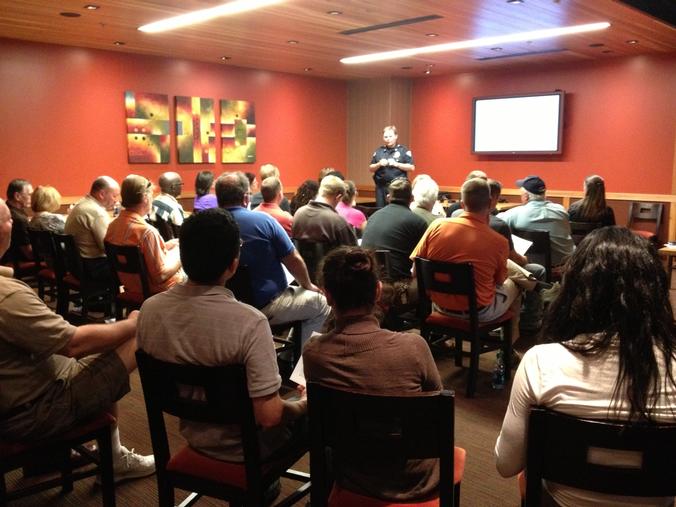