A Community Working Together

When you watch the news or read the news it is almost a certainty that you will learn about negative issues, concerns or problems in a community.  It is a reality that these issues exist.  I like to bring attention however to positive events in our community that you may or may not be aware of.  The Madison Police Department is committed to providing high quality police service to this city and to all members of our community.  We believe that in order for our department to be successful in improving safety and the quality of life the community enjoys the police and members of the public must work together to address issues directly.  A recent event that took place in our community is a prime example of this mission that I would like to shed light on.

In July of 2013 a 9 year-old girl was severely injured after being struck by a vehicle on Vera Court in Madison when she was crossing the street to get ice cream.  This accident led to a combined effort by the neighborhood, Traffic Engineering, Alder Anita Weier and the Madison Police Department to develop safety features in the neighborhood to try to prevent future accidents like this from happening again.  As a result of this collaboration, three speed bumps were installed on the street as a safety measure.  Madison Police Department North District Neighborhood Police Officer David Dexheimer was greatly involved in this effort and I believe he took the extra step to make this a special event.  When the speed bumps were arranged to be installed Officer Dexheimer decided to host a parade.  The parade took place on Saturday, October 19 and was a complete success.  Officer Dexheimer took the time to plan the parade, apply and obtain a parade permit, build a float, arrange to bring his tractor to pull the float and to celebrate with the neighborhood in honor of the new speed bumps.  During the parade the children and families decorated each speed bump with chalk.  This is one event which I believe illustrates the positive relationship of the community and our police department working together.  If we continue to trust each other, work with one another and resolve problems together it will only lead to a better, safer and healthier city for all!

I encourage you to view the video links attached highlighting this event. 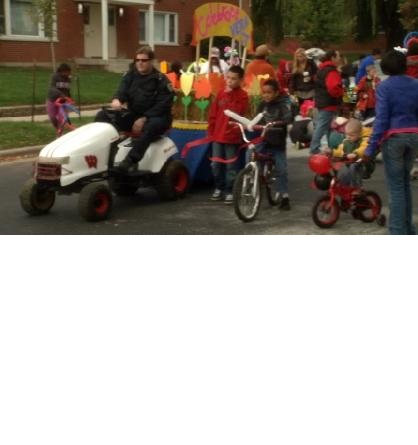