Sadly, Professor Herman Goldstein passed away earlier today.  Herman was a true pioneer and innovator in the field of policing.  Many of the policing concepts that are taken for granted today – like problem-oriented policing and community policing – originated with Herman.  He wrote two groundbreaking books – "Policing a Free Society" and "Problem-oriented Policing" – that encouraged police leaders to think beyond a traditional, reactive policing model.  Instead, Herman stood for professionalism in policing; for respecting constitutional rights; for working in partnership with the community; and for using evidence-based processes to more effectively serve the public.

Herman's philosophies were part of my initial training as an MPD officer in 1991. I am also fortunate to have been a student of his at UW Law School, and to have had a continued connection with him in his later years.  He was a great sounding board and resource, and remained dedicated to furthering the policing profession.  It is no exaggeration to say that many of the practices and values embedded in the organizational DNA of MPD and many other progressive police departments across the nation (and world) can be traced directly to Herman.  His impact on the field of policing – and the communities that benefit from progressive policing – is truly immeasurable. 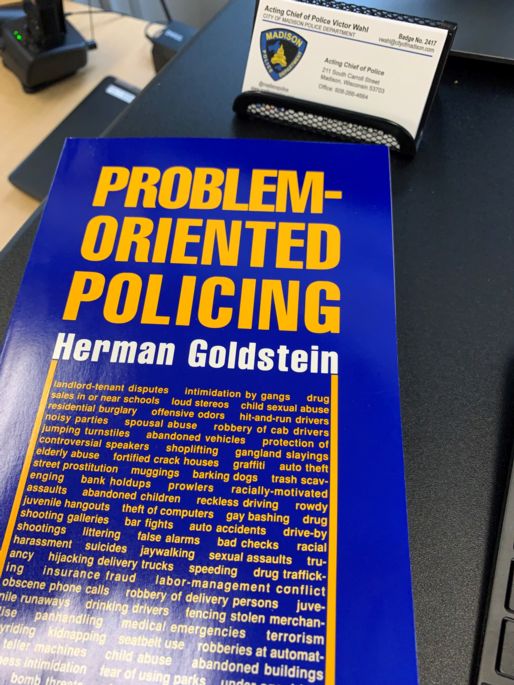 The information provided below about some of the calls officers responded to is derived from notes provided by MPD Officers-In-Charge (OIC) at the end of their shifts. Most narratives represent early and preliminary information that was gathered by an OIC from those in the field who were actively working cases. The OIC is sharing what they were being told in the moment. In many instances, facts and circumstances, even the type of crime listed, can change as officers, detectives and investigators continue their work.

CENTRAL: Domestic Disturbance – 5:23 am.  A caller to dispatch reported her ex-boyfriend/suspect (32-year-old male) had forced his way into her residence.  Upon arrival, officers did not locate the suspect.  Probable cause was developed to charge the suspect with domestic disorderly conduct upon his arrest.  *This was a late call that did not make the previous 24-hour cycle.

SOUTH: Found Property – 6:08 am.  A business owner reported finding a firearm on the stoop at the front entrance to his business on S Park St.  Officers responded and took possession of the firearm which was reported stolen by Jefferson PD.

WEST: Check Person – 6:48 am.  A caller to dispatch reported hearing sounds of a disturbance coming from a neighboring residence.  Officers responded and made contact with a subject who was attempting to harm himself.  The subject was transported to a local hospital and voluntarily admitted.

CENTRAL: Assist EMS/Fire – 8:53 am.  The downtown Madison College building was isolated due to a gas leak.  Madison Fire was on scene.  Police assisted with traffic control.

MIDTOWN: Weapons Offense – 9:21 am.  A student/suspect (15-year-old male) was observed attempting to enter Memorial High School with a knife.  The school resource officer worked with school staff members to intercept the suspect, disarm him and safely take him into custody.  The suspect was conveyed to JRC for having a dangerous weapon on school grounds.  An incident report was completed on MPD website.

CENTRAL: Check Property – 9:33 am.  Police received information that a blood trail was observed on the sidewalk of E Washington Ave near N Hancock St.  Upon investigating, officers determined the blood was related to a subject with a medical condition.  No further police action was necessary.

NORTH: Domestic Disturbance – 12:54 pm.  The victim and suspect (43-year-old male) are married.  During a verbal altercation, the victim asked the suspect to leave their residence, at which point the suspect punched a hole in the wall.  Officers responded and arrested the suspect for domestic disorderly conduct and criminal damage to property.

MIDTOWN: Disturbance – 12:57 pm.  The victim notified officers that a suspect (55-year-old male) has been harassing and stalking her.  Officers arrested the suspect and charged him with disorderly conduct, and also issued him a trespass ban and a stalking warning letter.  The suspect was conveyed to jail.

CENTRAL: Mental Health Conveyance – 5:15 pm.  Officers assisted Journey Mental Health with a subject who was under a Chapter 51 commitment and refused to return to the hospital.  The subject was placed in protective custody and transported to Winnebago Mental Health Institute.

SOUTH: Assist Police – 7:05 pm.  Madison officers were dispatched to assist Town of Madison PD with the investigation of an attempted armed robbery at the CP Mart on Rimrock Rd.  MPD officers assisted with maintaining the scene perimeter.

NORTH: Crash – 7:14 pm.  A driver (69-year-old female) T-boned another vehicle while attempting to make a left turn on E Washington Ave at Thierer Rd.  The driver suffered minor injuries and was conveyed to the hospital.  She was cited for failure to yield the right of way.

CENTRAL: Battery – 8:39 pm.  Officers were dispatched to JRC for a suspect (15-year-old female) who was causing a disturbance.  The suspect spit on JRC staff members and kicked multiple deputies.  Officers arrested the suspect for battery, assault and disorderly conduct and took her to jail.

CENTRAL: Disturbance/OMVWI – 12:58 am.  The suspect (24-year-old male) engaged in a physical altercation with another patron at the High Noon Saloon.  As the suspect left the bar he observed what he mistakenly believed to be the other involved party's vehicle leaving the area and broke the back window of the vehicle.  The suspect then left the scene in a vehicle headed inbound on E Washington Ave and struck a street light at Blair St, disabling his vehicle.  The suspect then reported his vehicle stolen.  Officers arrested the suspect and charged him with OMVWI 1st offense, hit and run, disorderly conduct, damage to property, obstructing an officer and possession of drug paraphernalia.

CENTRAL: Battery – 2:23 am.  The suspect (31-year-old male) created a disturbance at the Hub apartments at 437 N Frances St and punched a bystander and a Madison firefighter who had arrived on scene for a fire alarm unrelated to this call.  The suspect continued to be combative with security and UW PD and MPD officers who arrived on scene.  The suspect was arrested and charged with felony battery to firefighter, attempted battery, resisting arrest and disorderly conduct.