The Madison Police Mounted Patrol Unit's riding season is in full swing! You may see them out and about in a city park, bike path or neighborhood area during the week or you may see them working downtown on the weekends. The unit consists of four riders and four horses. The horses offer many advantages to their human counterparts. One being that they are an approachable means of policing the community.

Being approachable, the unit found that when they were in a neighborhood and would stop to talk with a resident that almost every neighbor in the block would come out to say HI. They also found that some neighbors had never actually met one another. The idea behind forming, what the unit now calls the "Community Corral", was that the horses 'coralled' up all the neighbors in one place to meet and discuss issues in their neighborhhood. The Community Corral took off and is in it's 3rd year. It is a way for the mounted patrol to pre-schedule visits to a particular neighborhood by conducting an informal meet and greet at an area park.

The unit has scheduled several upcoming "Community Corrals" throughout the City in June and July. Part of having a safer community starts with simply getting to know your neighbors. The horses are a great way to "break the ice" and let people interact in a positive way-both with each other and with the police. Your neighbors are a great first defense to be the extra eyes-and-ears for your community and can help keep it safe by alerting each other and police of any suspicious activity. Here are the upcoming dates and locations that the unit will appear in, rain or shine!

More dates will be announced in the future so stay informed by going to the horses Facebook page www.facebook.com/madisonmounted


Another exciting development for the mounted patrol unit  is the addition of a 4th city owned horse. Currently, out of the four horses on the unit, one is still officer owned. The unit suffered a devasting loss by the sudden passing of one of their veteran City mounts in March. The unit has looked long and hard and is proud to say they are in the trial-period of training in a new mount. The new horse will be the FIRST fully sponsored police horse through the non-profit, the Friends of Madison Mounted Horse Patrol. The sponsorship was made possible by a very generous donation by a local citizen. Field training includes exposing the new horse to the urban environment through a series of shifts worked on the street with a veteran police horse. The new horse will see many things including buses, sewer grates, man-hole covers, sidewalks, stairs, dogs, lots of people, traffic and of course, State Street.

Field training will continue to take a few more months after the 2-month trial period ends. Once all initial training is completed, the horse becomes an "official" member of the Madison Police Department and is placed into service. Once the new horse has completed 2 years of service, they receive their badge.

The new horses name will be revealed at the end of his trial period- we CAN tell you that he is a Friesian gelding, 8 years of age and LOVES people, so keep an eye out for him and come say HELLO! For more information on sponsoring a police horse, go to the Friends of Madison Mounted Horse Patrol's website at www.madisonmounted.org 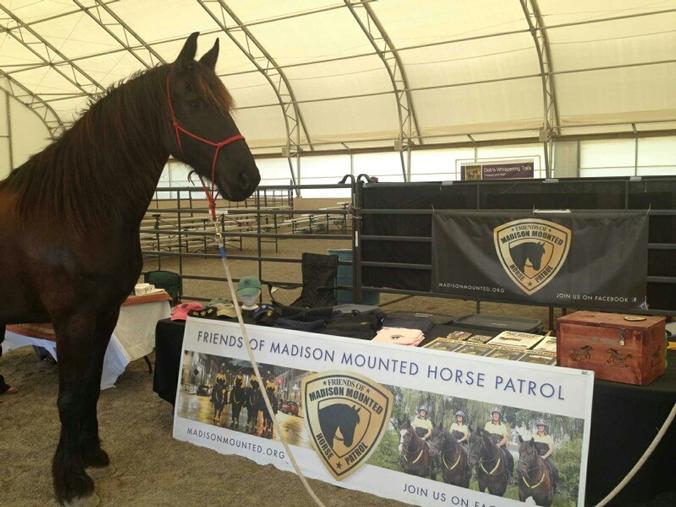 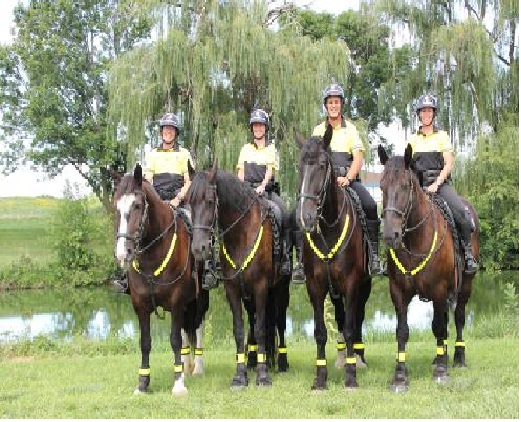 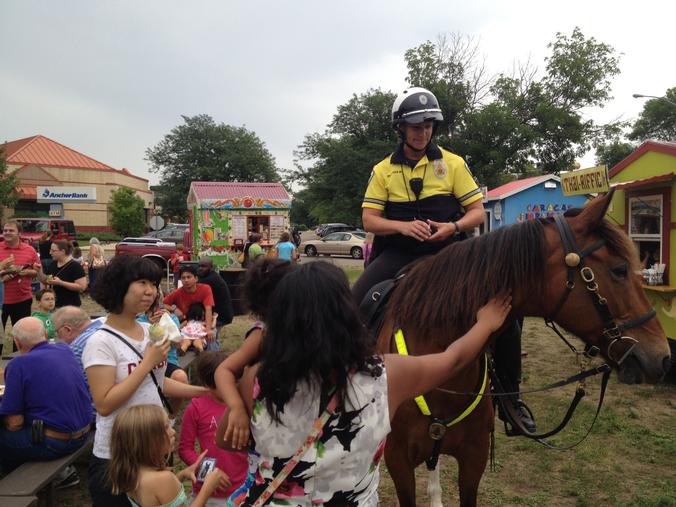 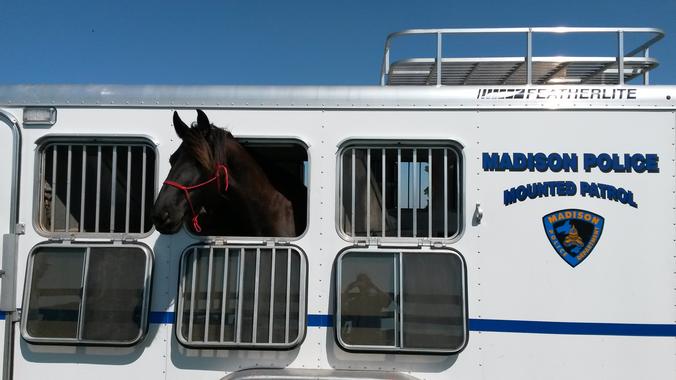 Information for this blog was provided by and authored by Madison Mounted Police Officer Sarah McLaughlin.