Let's take a closer look at Robberies from the month of March before diving into the calls-for-service.

There were 5 reported robberies in the month of March, 2018.  In March of 2017, there were 8 robberies; thus we have experienced a 38% decrease in robberies this year.

City-wide there have been 45 reported robberies from January through the end of March of 2018.  When reviewing data for the past 4 years, we have experienced an average of 48 robberies during the first three months of the year.  Based on these numbers, we have seen a 6% decrease in robberies this year compared to where we have typically been at this time in the past several years.

Where are there incidents occurring (March, 2018)?

Tonight is the 4th annual Play It Forward Charity Basketball Game (Kids vs Cops) at West High School.  Reverend Dr. Alexander Gee, Jr., Senior Pastor at Fountain of Life Church, came up with the idea of a charity basketball game between cops and kids several years ago.  The proceeds go to defray the costs of the West High Black Student Union Spring Break Tour in which historically black colleges are visited.  The game starts at 6:30pm tonight and is a wonderful family event.  We hope to see you there! 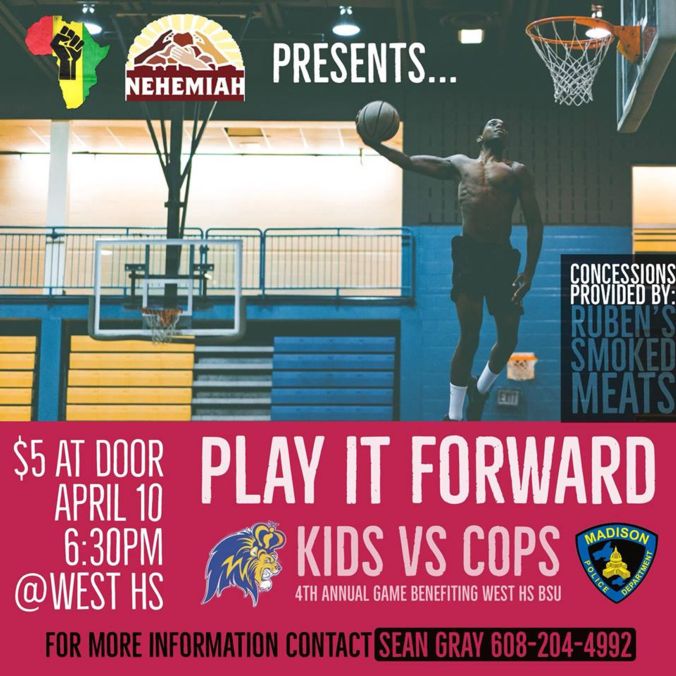 1) CENTRAL: Trespass – 4:08 a.m.  Officers responded to a convenience store on State St for a subject who refused to leave and was causing a disturbance.  The subject had been previously advised by officers to not loiter on the property or harass staff.  The subject/suspect (66-year-old AAM) was arrested for trespassing.  * This was a late call that did not make the previous 24-hour cycle call notes due to officers being involved at the scene and reports from the field were not yet typed.

2) NORTH: Retail Theft – 11:15 a.m.  Officers responded to the 3500 block of Packers Ave for a retail theft.  A suspect (AAF) stole cigarettes and left the area in a vehicle with two other individuals.  Investigation continuing.

3) SOUTH: Assist Police – 12:11 p.m.  Officers were requested to respond to the Waunona Woods/Bridge Rd area to assist the DEA/DCI with a suspect.  MPD assisted with a crash that occurred as a result of a DEA/DCI investigation.  MPD also assisted with transporting a suspect (27-year-old AAM) to jail.  MPD was not involved in the pursuit/crash.  The DEA/DCI has lead on this investigation.  Investigation continuing.

4) CENTRAL: Mental Health Conveyance – 2:18 p.m.  Officers responded to State St/W. Gilman St for a subject (19-year-old WF) causing a disturbance (getting into people's faces, knocking objects out of people's hands, yelling and physically striking a subject).  The subject was conveyed to a local hospital for a mental health evaluation.  Probable cause was developed for disorderly conduct.  The subject was subsequently conveyed to Winnebago.

5) CENTRAL: Stolen Auto – 2:59 p.m.  Officers responded to S. Fourth St/E. Washington Ave for a report of a stolen vehicle.  The vehicle may have had the keys left in it.  Attempt to locate aired.  The vehicle was listed as stolen in the appropriate databases.  Investigation continuing.

7) SOUTH: Domestic Disturbance – 3:39 p.m.  Officers responded to Moorland Rd for a verbal dispute between a mother (35-year-old AAF) and child.  The child (13-year-old MRM) caused damage to the residence and was also involved in a physical fight with his sibling (14-year-old AAF).  Officers assisted with a temporary placement of the juvenile to give some space between the mother/children.  Investigation continuing.

8) NORTH: Adult Arrested Person – 4:09 p.m.  Officers responded to Calypso Rd for a report of a disturbance involving a subject who was armed with a knife.  The subject (48-yar-old AAM) was contacted.  No knife was located.  The subject had an active parole violation warrant for which he was conveyed to jail.

9) SOUTH: Intoxicated Driver – 6:03 p.m.  Officers responded to Ashford Lane for a report of a subject with injuries.  Officers arrived and discovered that the driver/suspect (34-year-old WM) had been driving intoxicated.  The suspect was arrested for operating a motor vehicle while intoxicated (1st offense).

10) CENTRAL: Mental Health Conveyance – 7:04 p.m.  Officers responded to State St regarding a disturbance and contact was made with a subject (24-year-old WM) who had a pending commitment order in place.  The subject was taken into protective custody and conveyed to a local hospital.  The subject was subsequently conveyed to Winnebago.

11) SOUTH: Check Property – 7:23 p.m.  Officers responded to Greenway Cross/Index Rd for what was originally reported as a male subject refusing to let a female subject go.  Contact was made with the two individuals.  The female subject (28-year-old WF) appeared to be under the influence of drugs.  Drug paraphernalia was located in the vehicle but neither occupant admitted to drug use.  The female subject was conveyed to a local hospital for an evaluation.  Investigation continuing.

12) NORTH: Weapons Offense – 7:43 p.m.  Officers responded to Dryden Dr for a report of a disturbance.  A juvenile victim (14-year-old WF) reported being battered by an unknown AAM juvenile.  Investigation continuing.

13) NORTH: Check Person – 12:24 a.m.  Officers responded to Monterey Dr to check the welfare of a possible suicidal subject (15-year-old AAF) after she made some concerning comments on social media.  Officers attempted to locate the subject at multiple addresses.  The subject was ultimately located and conveyed to a local hospital for an evaluation.  The subject was left in the care of her parent and medical staff.

14) CENTRAL: Non-Residential Burglary – 4:28 a.m.   Officers responded to a business on E. Washington Ave for a report of an unknown subject inside the business.  Officers arrived, cleared the building and did not locate anyone inside.