The Madison Police Department's Gang Unit is a part of MPD's Investigative Services section and is comprised of four (4) officers and one sergeant (supervisor). The gang unit utilizes prevention, intervention, education, suppression, and community engagement in order to decrease membership and criminal activity of gang members. In addition to these core focus points, the gang unit works closely with MPD's Violent Crime Unit, Special Victims Unit, Burglary Crime Unit, and Special Investigations Unit. The Gang Unit role is to provide intelligence and investigative support to these units, other MPD sections/functions, and other police agencies.

The goal of the gang unit is to provide intelligence/assistance in the prevention and elimination of gang crimes and membership. Gang officers focus a significant amount of time on building relationships with those on the fringe of gang membership, as well as those that are current gang members. The gang unit's objective is to prevent and discourage future gang membership and criminal activity within the City of Madison and surrounding communities in Dane County.  This effort includes monthly gang intelligence meetings, classification of gang members, identification of new gangs, and meeting with stakeholders in the Department of Human Services, Department of Corrections, Madison Metropolitan School District, and other law enforcement agencies across the county.

By focusing their efforts on outreach and prevention, the gang unit has a unique opportunity to spend quality time interacting with, meeting, and building professional relationships with individuals that are on the fringe of choosing the gang life. Gang officers provide information on resources that provide potential members with positive alternatives. They work hard to change the behavior, attitudes, and criminal activities of current and prospective gang members through a multi-faceted approach of engagement and suppression. The collaboration with other agencies and stakeholders in the community provides them the necessary support and information to impact the effect of gang activity within our community. The gang unit strives to keep Madison a safe and desirable place for people to live, work, and play. 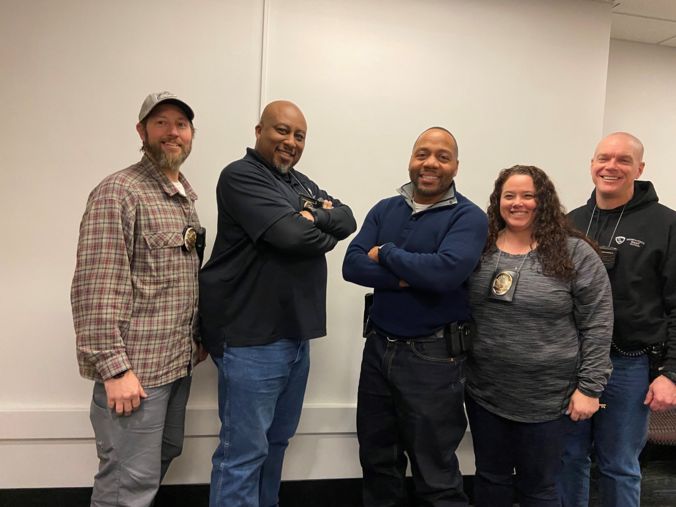 NORTH: Domestic Disturbance – 7:40 a.m.  Officers responded to a residence for a disturbance between two known subjects (male victim and female suspect).  The suspect was arrested for domestic disorderly conduct.

MIDTOWN: Information/Sexual Assault of a Child – 9:24 a.m.  Officers, along with Child Protective Services, met with a victim who reported being sexually assaulted by a known suspect.  Investigation continuing.

NORTH: Check Person – 9:58 a.m.  Officers responded to a subject experiencing an overdose.  MFD also responded and administered naloxone, which revived the subject.  The subject was conveyed to a local hospital for an evaluation.  No charges have been substantiated at this time.

SOUTH: Domestic Disturbance – 10:14 a.m.  Officers responded to a residence for a disturbance between two known subjects (female victim and 27-year-old male suspect).  The victim reported two incidents of domestic violence involving the suspect.  The suspect was not on scene.  The suspect has bail conditions to not have contact with the victim.  A gun was turned over to officers for temporary safekeeping.  Probable cause developed to arrest/charge the suspect for domestic battery (two counts), criminal damage to property and bail jumping (two counts). Investigation continuing.

NORTH: Missing/Runaway Juvenile – 10:34 a.m.  Officers received a report of a missing/runaway juvenile (17-year-old female).  The juvenile did not go home after getting into an argument with her mother.  No immediate safety concerns identified.  Attempt to locate aired.  The juvenile was listed as missing/runaway in the appropriate databases.

EAST: Threats Complaint – 1:00 p.m.  A threats complaint was reported to a School Resource Officer (SRO) at a local high school.  The suspect (19-year-old male) was contacted off school grounds and probable cause was developed to arrest/charge him with disorderly conduct and obstructing.  Safety plan for the identified victim put into place.

NORTH: Adult Arrested Person – 1:30 p.m.  Officers made contact with a subject/suspect (male) for failure to return a rented vehicle.  The suspect lied to officers about the location of the vehicle.  Probable cause was developed to arrest/charge the suspect for operating a motor vehicle without consent.  A probation/parole hold was placed on the suspect.  The vehicle was recovered and returned to the rental agency.

SOUTH: Mental Health Conveyance – 2:18 p.m.  Officers responded, along with Journey Mental Health, to check the welfare of a possible suicidal subject.  The subject was not located at home but areas were checked and the subject was located/taken into protective custody.  The subject was conveyed to a local hospital for a medical clearance and then transported to Winnebago on an emergency detention order.

MIDTOWN: Drug Incident – 5:56 p.m.  Officers responded to a report of an unresponsive subject in a vehicle.  MFD also responded and administered Naloxone, which revived the subject.  The subject/suspect (42-year-old male) admitted to using heroin.  The suspect was conveyed to a local hospital where he was cited for possession of heroin.  The suspect was referred to the Madison Addiction Recovery Initiative (MARI).

NORTH: Stolen Auto – 7:26 p.m.  Officers received a report of a stolen vehicle on Kipling Drive.  Attempt to locate aired.  The vehicle was entered as stolen in the appropriate databases.

EAST: Detox Conveyance – 8:30 p.m.  Officers responded to Rocky's Liquor Store on Milwaukee St for a subject/suspect (30-year-old male) refusing to leave the premises.  The suspect was contacted and found to be intoxicated.  The suspect was taken into protective custody due to his impairment and conveyed to detox.  The suspect was also cited for disorderly conduct.

SOUTH: Strong Armed Robbery – 9:12 p.m. A victim (male) reported being approached and robbed in the parking lot of Pick N Save on S. Park Street.  The victim was physically assaulted during the robbery.   The suspects (1-3 males) fled in a vehicle.  Investigation continuing.

MIDTOWN: Missing/Runaway Juvenile – 9:25 p.m.  Officers responded to a report of a missing/runaway 10-year-old child.  Concerns were noted for how the child was dressed when they left the residence.  Areas checked.  Attempt to locate aired.  K9 track conducted.  Unmanned Aircraft System (UAS) utilized.  Reverse 911 completed. The child was located safe.

NORTH: Fire Investigation – 11:32 p.m.  Officers responded to assist MFD with a fire at a 3-unit complex on Hoard Street.  MPD assisted with resident evacuations, scene perimeter and traffic control.  MFD has the lead on this investigation.