The Madison Police Department officially formed a K9 unit in 2005, a year after the formation of the non-profit fundraising organization, Capital K9s.  Prior to 2005, MPD utilized a few dogs (focusing on narcotics detection) but had not designated a formal K9 unit. The main obstacle to forming a K9 unit had been funding.  Police K9s are expensive, and they require a specially-equipped squad car to function.  MPD was able to connect with some community members who were interested in supporting the department ad Capital K9s was formed.

In 2005, Capital K9s had some early fundraising success, due largely to a donation from Midwest Family Broadcasting. This allowed the MPD K9 unit to get off the ground, as K9s Johnny and Greg were purchased and assigned to Officers Jim Donnell (Ret.) and Bart O'Shea, respectively.  Shortly after that, with funds donated to Capital K9s by Veridian Homes, K9 Gildon was purchased and assigned to then-Patrol Officer Jeff Felt (who retired in 2019 after serving as the K9 unit's second Sergeant). The fourth K9 of the unit, K9 Ivan, was purchased with a donation from the family of Mary Jane Meng, and partnered with Patrol Officer Henry Wilson (Ret.).

The K9 unit continued to grow thanks to funding support from the community through donations to Capital K9s.  Capital K9s made it possible for the K9 unit to continue adding dogs, vehicles and equipment, and to invest in the training and certification of human and K9 officers in the unit.  Aside from officer salaries and benefits, all K9 unit expenses (dogs, equipment, training, vehicles, etc.) are funded through donations.

Today, the unit – under the leadership of MPD's Executive Section/Operations Captain – is comprised of eight officers paired with eight dual-purpose K9s, and a sergeant who coordinates staffing, training, equipment, and veterinary services needs for the eight k9 teams (the sergeant does not handle a K9).  The unit provides services to the city across all shifts and districts, and provides support to all units of the Madison Police Department.  The unit also routinely provides support to other local, state, and federal agencies working around or in the city, such as suburban municipal police departments, county Sheriffs' departments, the FBI, US Postal Service, and the Bureau of Alcohol Tobacco and Firearms.

Dual purpose K9 teams engage in policing by detecting people, artifacts and evidence, or illegal drugs.  They assist with tracking, building searches, vehicle searches, area searches, article searches, and suspect apprehensions.  Their work has resulted in the location of missing persons, detection of illegal drugs and guns, and informed investigations – helping to lead to the arrests of dangerous suspects.  They regularly support dangerous tactical situations and, thanks to the non-profit organization Wisconsin Vest-a-Dog, do so with donated bulletproof vests keeping them safe.

One of the K9s, Carl (purchased with funds donated by Ms. Mary Morton), began his working career with a single-purpose focus on explosives-detection.  In that role, and continuing today, he regularly works large events such as athletic games or public appearances by government officials or political candidates, clearing spaces to ensure there are no explosives present.  This year he and his current handler assisted with a suspicious package near an event and helped officials determine that the item – full of wires and duct tape – was not explosive.  The team recently trained in New Mexico with federal agencies and will work toward achieving National Odor Recognition Training and Certification by the Bureau of Alcohol, Tobacco, and Firearms this Spring (a prestigious federally-recognized certification).

The K9s in the unit were all bred overseas in areas like Poland, Czechoslovakia, and the Netherlands from proven working dog lines, and then purchased from training kennels in the United States.  MPD selects K9s from those training kennels – where the unit's officers go through extensive handler training for approximately six weeks when first paired with a K9.  Once an officer and K9 team complete their initial training and begin working together in the City of Madison, they engage in additional local training prior to responding to calls independently.  The K9 teams engage in continuing education one full day every two weeks, and conduct individual training exercises while on- and off-duty.  The unit regularly trains with certified Master Trainers and attends conferences. When not working or training, the K9 teams engage in frequent demonstrations in the community and serve as ambassadors for MPD and for the benefits of community policing.

The unit's human officers are almost always together with their K9 partners, who all live with their handlers and the handlers' immediate family members.  The relationships that K9 handlers and working K9s form are indescribably close due to the unique, challenging, and rewarding nature of their work.

The unit continues to be supported and funded by Capital K9s, which is a non-profit comprised of incredible community volunteers who donate their time to fundraise and organize events to support and promote the unit.  The unit looks forward to its evolution and continued engagement with the greater Madison community.  Consider attending community demonstrations and Capital K9 events when you can to learn more about us and to meet the officers (humans and K9s) in person. 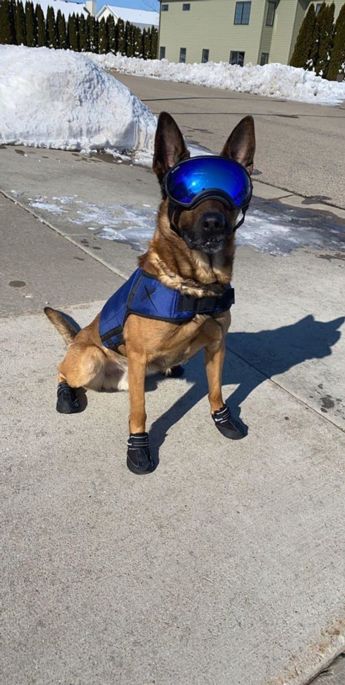 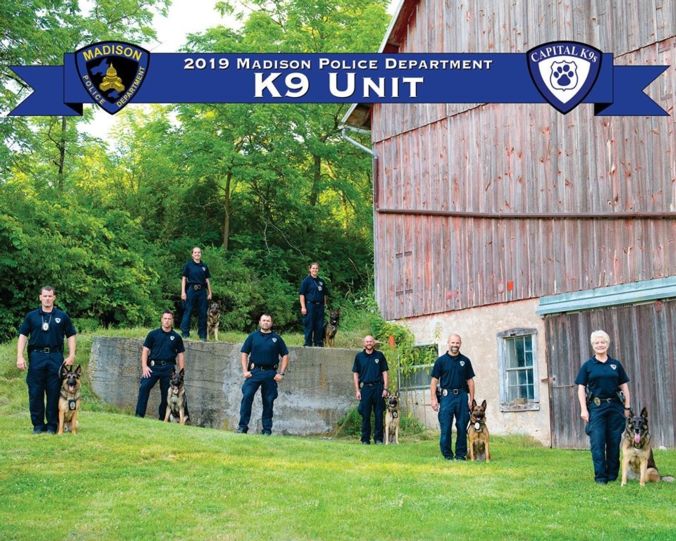 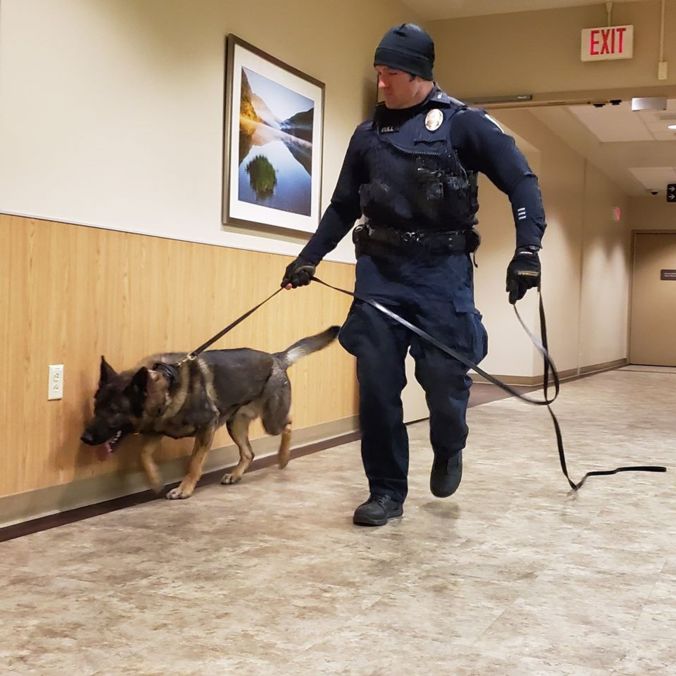 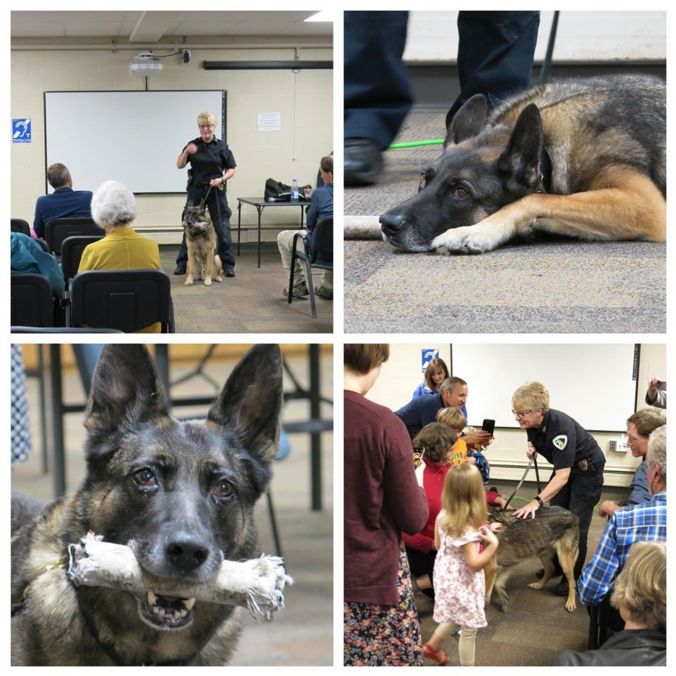 WEST: Adult Arrested Person – 10:02 a.m.  A reckless driver was called in – driver/vehicle all over the road, tailgating, crossing the center line, speeding, going off the road, etc.  The driver/suspect (49-year-old male) was located on Mineral Point Rd and a traffic stop was conducted.  The suspect was found to be impaired.  The suspect was arrested/charged with operating a motor vehicle while under the influence (4th offense).

MIDTOWN: Weapons Offense – 12:23 p.m.  Officers responded to Whitney Way/Tokay for a report of a subject being struck in the arm with a round from an airsoft gun.  The victim reported that the suspect was in a vehicle that turned onto Odana Rd.  There was a delay in reporting of this incident.  Investigation continuing.

EAST: Drug Incident – 9:04 p.m.  Officers responded to N. Thompson Drive/Commercial Ave for a subject/suspect (58-year-old male) slumped over on the sidewalk.  MFD also responded and administered Naloxone to the suspect.  The suspect admitted to using heroin.  The suspect was cited for possession of heroin and referred to the Madison Addiction Recovery Initiative (MARI).

NORTH: Non-Residential Burglary – 11:28 p.m. Officers responded to the Community Center on Straubel Court for a subject/suspect (18-year-old male) breaking into the building and stealing items.  A perimeter was established and the suspect was taken into custody when he exited the building.  The suspect was charged with burglary while armed (knife was located on the suspect), carrying a concealed weapon, theft, a probation violation and outstanding warrants.