In 2015, MPD formed the Violent Crime Unit (VCU), initially consisting of six detectives and one detective sergeant. This pilot program reflected a new approach within the department, utilizing a specialized, team approach to handle major crime investigations. VCU generally focuses their work on homicides, attempted homicides, pattern armed robberies, and kidnappings. These investigations tend to be long term and require significant investigatory resources.  Nationally, the vast majority of police departments have moved in the direction of a centralized approach to investigate major cases. A team approach utilize the strengths of all members of the group, shares ownership of each investigation between the entire group, and improves communication/information sharing.

Due to the continued success of the unit, in 2017, the Violent Crime Unit expanded by an additional six detectives and a detective sergeant to cover afternoon and evening hours.  VCU detectives are regularly called in outside of normal work hours to respond to homicides, shootings and other violent offenses. Detectives assigned to VCU typically have accumulated significant experience as an officer or detective, and actively participate in department collateral assignments such as SWAT, SET, or as instructors at MPD's pre-service academy.

All members of the Violent Crime Unit serve or have a role as the lead investigator on a major case and also assist other members of the unit in a supporting role. The typical day for a detective in the Violent Crime Unit can consist of conducting interviews, apprehending suspect(s), transporting evidence to the Wisconsin State Crime Lab, reading reports, responding to citizen tips, attending court hearings, or preparing for court trials with the District Attorney's Office.

One example of the fine work done by VCU was highlighted by the Investigation Discovery cable television network. The episode titled, "See no evil – happy birthday to Drew" which originally aired in May 2019, (Season 5, episode 13) covers the tragic death of Andrew Nesbitt and the subsequent investigation conducted by the Violent Crime Unit and lead detective Pedro Ortega-Mendoza. 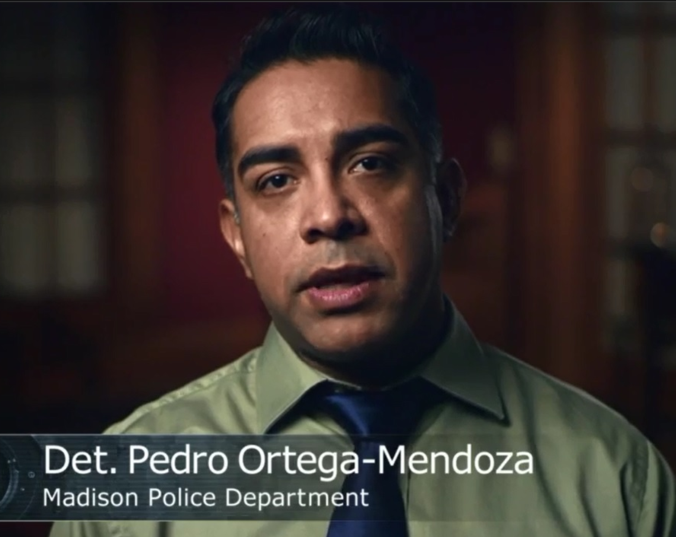 NORTH: Recovered Stolen Vehicle – 8:41 a.m.  An officer located a vehicle on Northport Drive that was reported stolen.  The vehicle was unoccupied.  Vehicle recovered.

SOUTH: Adult Arrested Person – 12:54 p.m.  Officers responded to the South Transfer Point for a subject/suspect (28-year-old female) inhaling a substance out of a can.  The suspect was contacted and found to be in possession of four cans of Dust-Off.  The suspect was arrested for intentionally abusing a hazardous substance.

EAST: Stolen Vehicle – 3:25 p.m.  Officers received a report of a stolen vehicle from the parking lot at La Follette High School.  The driver of the vehicle did not know where the keys to the vehicle were.  Attempt to locate aired.  The vehicle was listed as stolen in the appropriate databases.

MIDTOWN: Mental Health Conveyance – 3:42 p.m.  Officers responded to a report of a suicidal subject.  The subject (17-year-old female) was contacted and taken into protective custody.  The subject was conveyed to a local hospital where an emergency detention was sought.  Transport pending.

NORTH: Assist Law Enforcement – 6:52 p.m.  Officers responded to assist the Town of Madison Police Department with an incident in their jurisdiction.  MPD assisted with taking a subject/suspect into custody.  The Town of Madison PD has the lead on this investigation.

CENTRAL: Theft – 7:45 p.m.  Officers responded to several reports of stolen credit cards involving the same suspect (53-year-old male) who was being detained by bystanders.  The suspect was arrested/charged with financial transaction card crime/fraudulent use transaction, theft, disorderly conduct, possession of marijuana and operating without a license.

CENTRAL: Intoxicated Driver – 11:01 p.m.  Officers responded to a crash at E. Dayton St/N. Paterson St.  A vehicle struck a house and a gas line.  MFD and MG&E responded.  The driver/suspect (44-year-old female) was found to be under the influence.  The suspect was charged with operating a motor vehicle while intoxicated (1st offense).

WEST: Domestic Disturbance – 11:21 p.m.  Officers responded to a residence for a domestic disturbance between two subjects (female victim and 54-year-old male suspect).  The suspect struck the victim in the face and prevented her from calling the police.  The suspect fled and was not on scene when officers arrived.  The suspect was contacted and arrested for felony intimidation of a victim, battery, disorderly conduct and a probation/parole hold.

CENTRAL: Disturbance – 1:47 a.m.  Officers responded to a disturbance between two subjects (male victim and 50-year-old male suspect). The suspect strangled the victim.  The suspect was arrested for felony strangulation.