We are now a little more than two weeks into the Governor's "Safer at Home" order.  A few updates:

MPD officers have continued to focus on education and voluntary compliance when responding to possible violations of the order.  However, the order is just that – an order – and it is enforceable by arrest or citation.  So, please do your part...stay home unless you need to go out for something essential.  If you do need to go out, practice social distancing and minimize your exposure to others.  Adhering to these restrictions is undoubtedly inconvenient and difficult; but doing so is critical to the health and safety of our community. 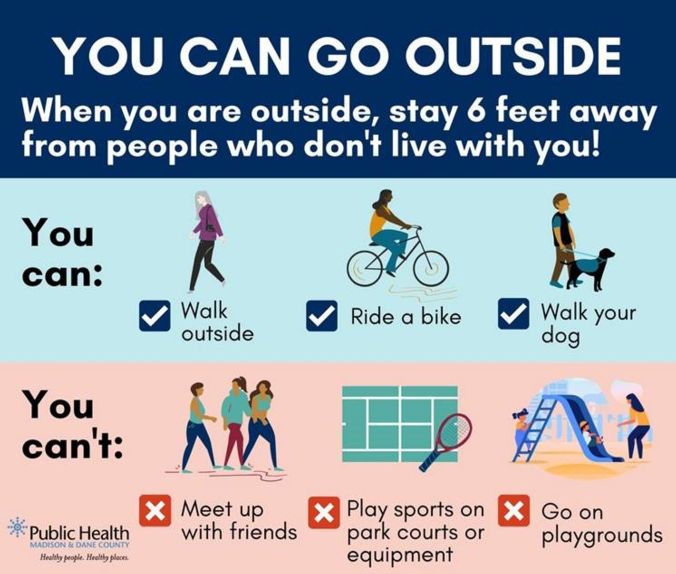 WEST: Death Investigation – 7:59 a.m.  Officers responded to a parking lot of a business to check the welfare of a subject in a vehicle.  The subject (60-year-old male) was found deceased.  Nothing suspicious identified.  The decedent was homeless and video footage shows he was in the parking lot for several days.  Medical Examiner's office responded.  Autopsy pending.  Investigation continuing.

EAST: Crash with Injuries – 1:49 p.m.  Officers responded to the area of Buckeye/Camden for a bicycle vs. motor vehicle crash.  A juvenile was riding his bike in the rain and went through an intersection due to brakes failing.  A vehicle, coming through the intersection, collided with the bicyclist.  The juvenile sustained minor injuries.  No citations issued at this time.

WEST: Crash – 3:50 p.m.  A driver sideswiped a squad that was occupied by an officer.  No injuries sustained.  The driver was cited for unsafe lane deviation.

WEST: Theft from Auto – 4:39 p.m.  Officers responded to a residence after the caller/victim reported that five juveniles were going through her vehicle without her consent.  The victim reported that she had one of the juveniles detained.  The juvenile was able to get away and was no longer on scene when officers arrived.  Perimeter set up and area canvassed.  One juvenile (12-year-old male) was apprehended and charged with theft (party to a crime).  The juvenile was released to a responsible party.  Investigation continuing.

EAST: Missing/Runaway Juvenile – 10:55 p.m.  Officers responded to a report of a missing/runaway juvenile (14-year-old female).  No safety/medical concerns identified.  Attempt to locate aired.  The juvenile was listed as missing/runaway in the appropriate databases.

WEST: Domestic Disturbance – 12:23 a.m.  Officers met with a victim who reported a physical disturbance with a known suspect (33-year-old male).  The victim sustained injuries which required stitches.  The suspect was not located.  Probable cause developed to arrest/charge the suspect, once located.  Investigation continuing.

EAST: Missing/Runaway Juvenile – 1:53 a.m.  Officers responded to a report of a missing/runaway juvenile (16-year-old male).  No safety/medical concerns identified.  Attempt to locate aired.  The juvenile was listed as missing/runaway in the appropriate databases.