Earlier this year the Wisconsin Council on Children and Families released a report on "Race to Equity" which showed some staggering statistics about racial disparities in Dane County.  In addition to this report, Rev. Dr. Alexander Gee, Jr.'s "Justified Anger" story that ran in the Capital Times in December of 2013 voiced continued concerns for how African-Americans are being treated in Madison.  Racial equality is an important topic to the City of Madison and to our police department.  In keeping with one of the Madison Police Department's core values of "human dignity", which is where we acknowledge the value of all people and carry out our duties with dignity, respect and fairness to all, we reached out to Rev. Dr. Alexander Gee, Jr. and invited him to attend one of our Management Team Meetings to discuss this issue more in-depth and to further explore the role of Law Enforcement and specifically what we can do to further positive change in the area of racial disparity.

As stated earlier, there were some alarming findings in the "Race to Equity" report.  In 2011 the unemployment rate for African Americans in Dane County was 25.2%, compared to 4.8% for whites.  In this same year the Census' American Community Survey reported that over 54% of African American Dane County residents lived below the federal poverty line, compared to 8.7% of whites.  74% of African American children in Dane County were considered to be poor, compared to 5.5% of white children.  With regards to education, African American third graders were 4.5 times more likely (in 2011) not to meet reading proficiency standards than their white classmates.  Only 50% of African American students were graduating on-time in the Madison Public School District, compared to 85% for white students.  The racial disparities continue in the juvenile justice system.  African American youth were 15 times more likely to spend time in the county's secure detention program in 2011 than their white youth counterpart.  These disparities carry-over to the adult criminal justice system as well.  African American adults were arrested at a rate more than eight times that of whites in 2012.   These are just a few of the statistics provided in the report.  You can read the entire "Race to Equity" report by going to the following site: http://racetoequity.net/dev/wp-content/uploads/WCCF-R2E-Report.pdf


In April of 2014 Rev. Dr. Alexander Gee, Jr. and Anthony Cooper, Director of Dignity Project/Employment Services at Nehemiah Center for Urban Leadership Development, attended one of our Management Team Meetings to discuss racial equality and to provide their insight into the issues at hand.  They talked about the need for a broad focus with community members and all stakeholders to address the gap in education and low graduation rates, issues surrounding mass incarceration rates and how we can improve the economic development within our communities of color.  We also used this time to talk to Rev. Dr. Alexander Gee, Jr. and Mr. Cooper about the numerous ongoing initiatives here at Madison Police Department that are positively contributing to addressing racial disparities. You can see the entire working document on our website:  http://www.cityofmadison.com/police/documents/trustBasedInitiatives.pdf

The Madison Police Department is committed to working with community leaders in our City to reduce racial disparities.   We will continue to reach out to community leaders to invite them to our Management Team Meetings to deepen the discussions on what we can do to ensure that everyone in our community is treated equally.

Photos of Rev. Dr. Alexander Gee, Jr., Mr. Cooper and some of our Management Team: 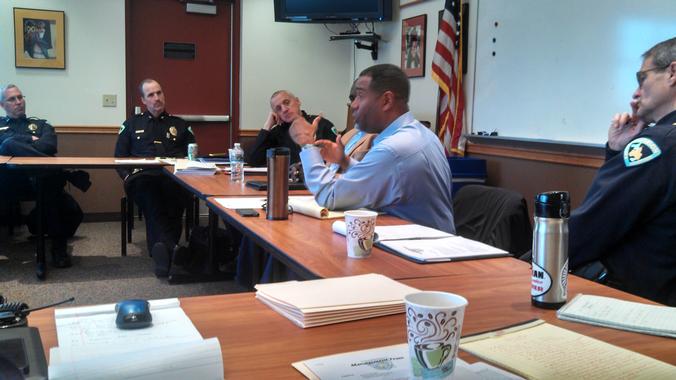 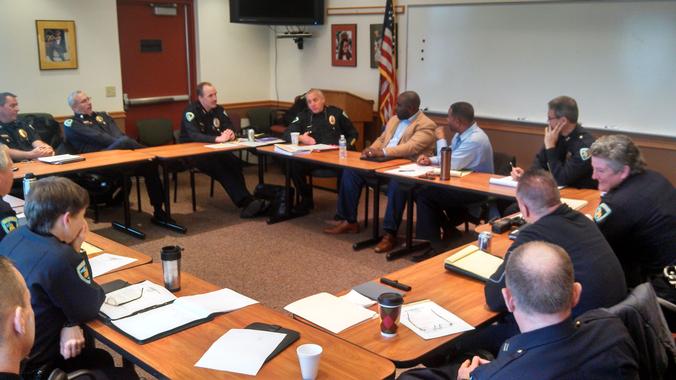 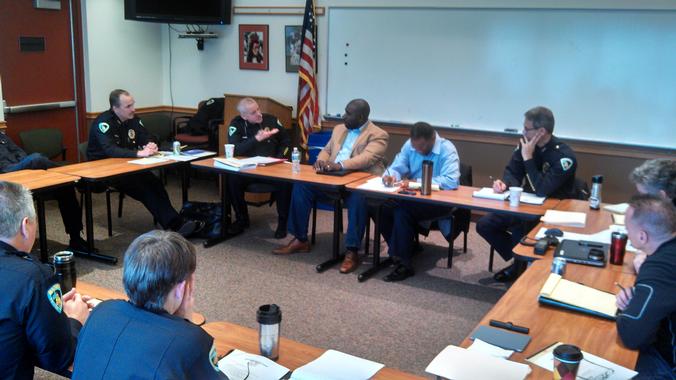 Information for this blog was provided by and authored by Assistant Chief Randy Gaber.