MPD was honored to host Bryan Stevenson who spoke to our recruit class on Monday, October 26.  Stevenson is a New York Times Bestselling author of Just Mercy, a book which also won the Carnegie Medal for Excellence in Nonfiction.  Stevenson was in Madison to accept the "Distinguished Achievement" award from the National Council on Crime and Delinquency and also appeared to deliver a speech at UW-Madison. The University chose Stevenson's book as the featured "Go Big Read" for the campus and community-wide reading initiative.

Stevenson's titles include defense attorney, activist, law professor and executive director of the Equal Justice Initiative (EJI).  His capacity to engage and enlighten his audience(s) are both inspiring and motivational.  Stevenson has won national acclaim for his work defending those most in need – the wrongly convicted, children, and the mentally ill.  His challenging discussions on mass incarceration and excessive punishments are particularly concerning in examining the inequities of the criminal justice system.  Just Mercy chronicles how "justice" has decidedly different outcomes for those who are persons of color and poor than for those who have means. . .  and Stevenson has spent his entire adult life acting as an advocate for the "voiceless."

This past summer, we directed all of our incoming recruits to read Just Mercy prior to their arrival on September 14 (which marked the start of their lengthy training academy).  We also purchased 20 copies for our Management Team to review. The book has been incorporated into various aspects of this fall's academy instruction and is referenced to many of our subject matter areas including law, ethics, unconscious bias and cultural competencies.  When I learned that Stevenson was coming to Madison to speak in October, Sgt. Tim Patton was assigned to reach out to Stevenson's people to see if we could beg for an hour of his time to address our academy.  Suffice to say, I was thrilled to learn that Stevenson was intrigued that we were using his text as a teaching reference in our academy; he apparently had not ever heard of this being done before and agreed to visit with our students.  We also reached out to Dr. Floyd Rose, President of the Madison Chapter of 100 Black Men, to ask them to co-host and participate in the "Q and A" session that we wanted to host.  Rose immediately assented to the offer and together (100 Black Men and members of the MPD) were treated to a round robin of various questions originating from the recruit class as well as our community guests.

Stevenson described his work with EJI and a broken criminal justice system.  His staggering statistical description of those who are either in prison or jail, on probation or parole, disenfranchised from ever being able to vote, and the consequences of how "getting tough on crime" legislation has branded millions in our midst left many of us dazed and discouraged.  Yet Stevenson remains an extremely hopeful and encouraging beacon of light who prefers to have our country create concrete goals for reducing incarceration and exploring systems improvements that are within our grasp.  Stevenson's life experiences and the various cases he related are simultaneously provocative, sad, and oftentimes triumphant.  What resonated the most for me was Stevenson's recommendation that there be a paradigm shift across the board in law enforcement from the "warrior" to "guardian" philosophy as well as his challenge of "proximity"---in order to be relational to the people you serve as a police officer, you have to get close enough to get to know your constituents, to take chances on forging these grass roots relationships by getting out of the cars and sharing of yourself and your time---particularly when we are not in full blown crisis mode of response.  These are goals consistent with President Obama's Task Force on 21st Century Policing---goals that the MPD is using as a template for reviewing how we work with community.

For those who have not had a chance to experience Bryan Stevenson, I strongly urge you to get the book or at least watch his TED talk presentation (https://www.ted.com/talks/bryan_stevenson_we_need_to_talk_about_an_injustice?language=en).  You won't be disappointed!  On behalf of MPD,  I want to thank Mr. Stevenson, his people at EJI and 100 Black Men for a thoroughly remarkable hour! 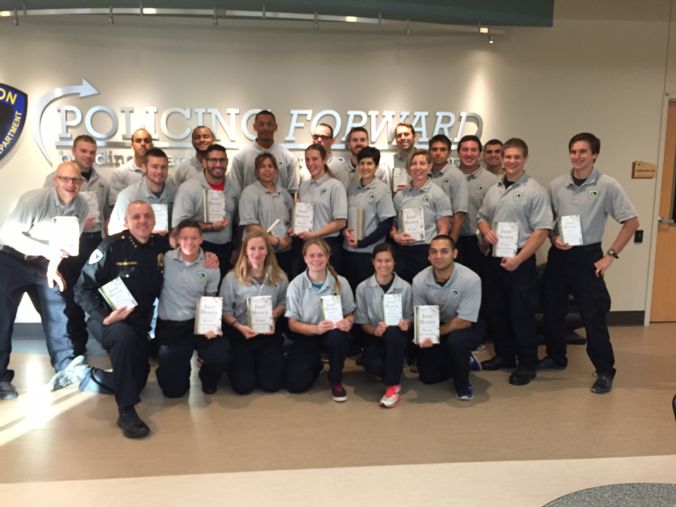