During a recently completed series of neighborhood forums, a few people inquired about the challenges of maintaining "quality and control assurance" measures with a work force of over 600 employees, spread out over five separate shifts, covering approximately 90 square miles in five districts?  It starts with hiring the best and brightest; those most committed to the nobility of selfless service.  When you start with dedicated people brimming with character and caring, the sky is the limit and the job of MPD is to continually reinforce that sense of vision and work ethic.  One of the ways that I try to affirm our collective passion(s) in promoting MPD's mission and core values is by means of our annual in-service training, which is the kick-off for all employees---sworn and civilian--in the first quarter of the year.

As Chief, I get the privilege of having the entire first hour of these annual "revival" meetings.  My "theme" for this year's remarks, "Police Like A Champion," has been an adopted mantra which I began years ago as a training sergeant (inspired by Notre Dame's, "Play Like A Champion," . . .sorry Badger Nation).  I have signs proclaiming and reminding myself (and others) of this benchmark prominently displayed in my office and throughout all of our facilities.  This is a shorthand prompt which serves, I hope, as a means of inspiring us to take community policing to new heights, now, more than ever before.  Particularly in light of the "Ferguson effect" that has surfaced in some urban settings where the police engage in a practice known informally as "de-policing;" officers do only the bare bones minimum of servicing calls and then seek refuge in the station or stay out of sight.  It's a phenomenon predicated on the fact that cops in some of these markets are so concerned about their exposure to complaints, cameras, liability, etc., that they are only going to do what is required of them.  What a sad commentary!

In the midst of some of our most difficult times, I have stumped long and hard with our employees that there is a greater sense of urgency in our need to be connected to our community through daily attempts at engaging with people-- as people.  Establishing our commonalities and striving to demonstrate the humanity that is under the "badge" and providing customer-focused services from both our sworn and civilian work force(s) is the way that MPD will shift the paradigm of a national narrative that presumes that policing is steeped in bias and characterized by excessive force.  While that may be the case elsewhere, that is not the norm in Madison.  Racial disparities are far more complex than laying the blame at the feet of the police and the overwhelming majority of police/citizen contacts in Madison (and we service roughly 15,000 calls a month) are resolved with presence, professional communication, and effective crisis intervention and de-escalation skills, where officers never even touch a citizen! (Except when offering a handshake or a much-needed hug, of course).

A word to the critics of MPD:  we are still committing all of our efforts to providing everyone with quality services.  We are doubling down on building relationships one call, one contact, one transaction at a time.  This means parking the car when there ISN'T a crisis underfoot and connecting with people wherever we find them. . .meeting up with folks at our parks, malls, playgrounds, AND our neighborhoods--particularly those neighborhoods which face the greatest challenges of poverty and instability.  Madison is blessed to have a police department that models exceptional service . . . where the police can and do make a difference in the lives of others.  (Please see the template below which served as the basis of my 2016 address to all employees of the MPD). 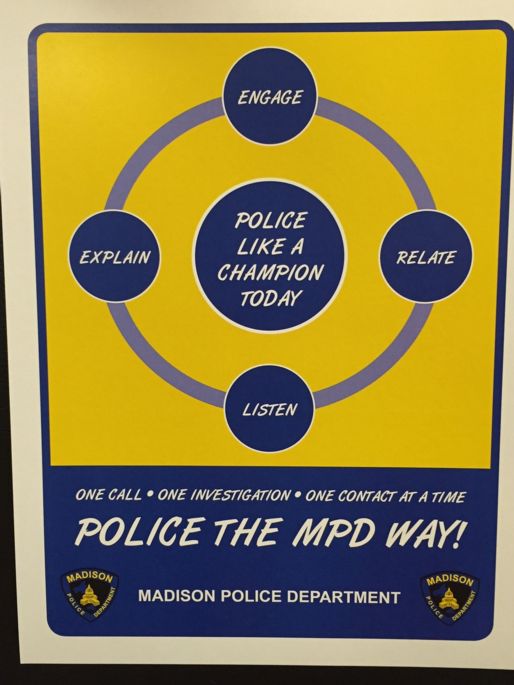 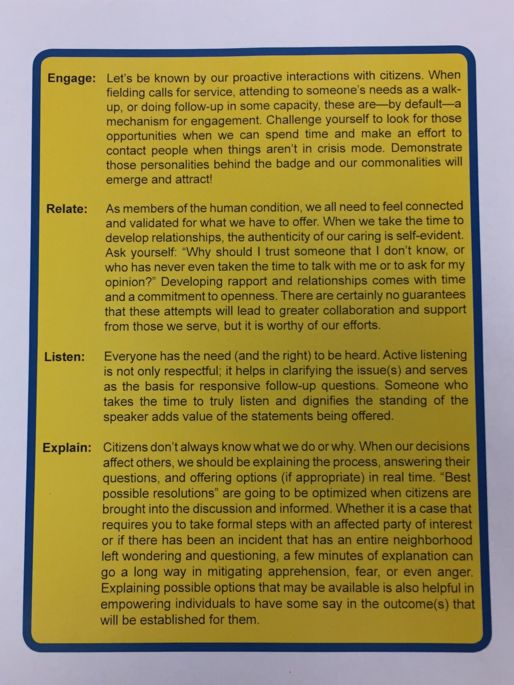