Today, the MPD family will be mourning the loss of one of our own, Lieutenant June Groehler.  June will be laid to rest following a full honor guard ceremony later today.  Our mourning badges have been prominently displayed and will remain worn until sunset on Saturday evening as we also pause to reflect on the death of a young Milwaukee police officer.

Lieutenant June Groehler, an 18-year veteran of the Madison Police Department, sadly and unexpectedly passed away on June 7th after falling ill.  June will be greatly missed by the department she was so proud of and by many in the community who she personally touched.  June embodied all of MPD's leadership values but will likely be most remembered for her caring and compassion for fellow officers and members of the community and for her commitment to serve.

June joined the Madison Police Department in May 2000 and started in Patrol Services.  She was assigned to the North, Central and East Districts, working mainly on the afternoon shift.  She always had a creative mind and took initiative early on as an officer – for example, June created the first databases that organized mental health and neighborhood resource information for patrol officers.

In 2007, June was promoted to Sergeant and was first assigned to Patrol Services in the South District and then to Professional Standards and Internal Affairs.  It was during her time as a Sergeant that June pushed MPD's outreach efforts and experience in technology and cybercrime.  June created a "Cyber-Detective" program for middle school aged youth, developed interactive videos on cyber safety that were shared nationwide, formed the Cyber Safety Committee that brought local, state and federal agencies together to discuss and strategize around cybercrime trends and founded the Council for Cyber Safety for Children.  June continued to instruct classes on cyber safety, social networking and cyber bullying for many years.

In 2011, June was promoted to Lieutenant and was assigned to the South District where she served as the Detective Lieutenant until 2013.  In 2013, June transitioned to the South District Patrol Lieutenant role. June supervised the South District's Patrol Sergeants and Detectives, Neighborhood Officers, Neighborhood Resource Officer, Educational Resource Officer and Community Policing Team.   She recently led community involved assessments in the Arbor Hills and Leopold neighborhoods, coordinated police staffing for multiple events like the recent Ironman Wisconsin 70.3 triathlon, regularly monitored calls for service trends and somehow still managed to routinely check in with the people she supervised and make sure they were supported.

June was dedicated to developing, mentoring and training fellow officers but also members of the community.  June was a Field Training Officer and Field Training Sergeant for the MPD and helped shape the careers of many MPD officers.  She also served as an instructor at Madison College, ITT Technical College and Upper Iowa University.  June was also very committed in bringing more women to the field of policing.  She served proudly as a former President and active member of the Wisconsin Association of Women Police.

Over her 18-year career, June received 50 written internal recognitions or citizen compliments for her work.  She also received MPD's "Outstanding Service Award" in 2010 and again in 2012.  In 2012, she also received the "Innovation in American Government Award" from Harvard University for her work with the MPD Cyber Safety Committee.  She also was awarded Wisconsin Technical Colleges "Excellence in Teaching Award" in 2007.

Lt. June Groehler loved her community and took great pride in her ability to serve.  There is now a large void at the South District and MPD overall. June's legacy will live on in our ranks and in the communities she impacted. 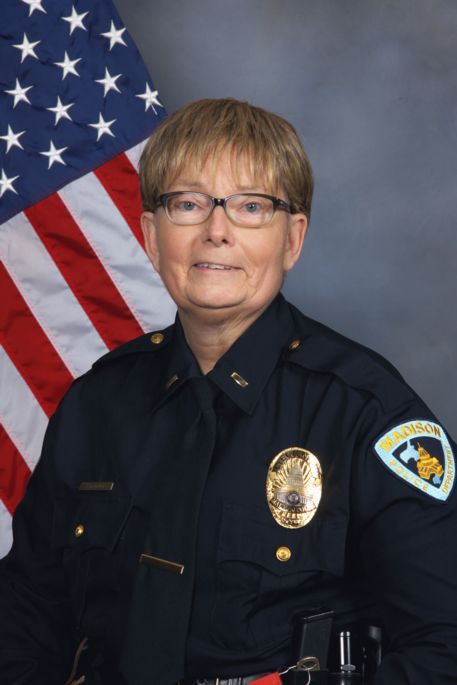 To further break down the 553 calls for service for the past 24-hours this is how the calls came in per district: Central (104), East (96), Midtown (73), North (84), South (70), West (88), and Other (38).  Other=these are calls for service that either do not have a sector listed or the sector is not in the City.  For example, if one of our officers assists another law enforcement agency, their sector is not listed in our districts so therefore it is listed under "other".

1) NORTH: Sexual Assault of a Child – 6:39 a.m.  Officers responded to a local hospital and met with a victim (16-year-old WF) who reported a sexual assault that occurred in April.  Child Protective Services notified.  Investigation continuing.

3) NORTH: Adult Arrested Person – 12:57 p.m.   Officers responded to Dryden Dr for a domestic disturbance between two subjects (25-year-old AAF victim and 28-year-old AAM suspect).  The victim and suspect are dating.  The victim reported that the suspect hit her and strangled her.  The suspect was not on scene when officers arrived but he was located and arrested for domestic-related charges of battery, strangulation, disorderly conduct as well as resisting.  The suspect was conveyed to and booked into jail.

4) CENTRAL: Battery – 1:02 p.m.  Officers responded to a report of a battery that occurred in the area of Library Mall overnight.  Two victims (30-year-old AAF and 31-year-old AAM) reported that while sleeping, an unknown subject/suspect (AAM) kicked the female in the head/torso causing a black eye and a laceration requiring stitches.  The male victim attempted to defend the female and sustained several scratches.  Suspect not identified at this time.  Investigation continuing.

5) MIDTOWN: Attempt to Locate Person – 4:16 p.m.   A request came in from Onalaska PD requesting that officers check an address for a wanted subject/suspect (33-year-old AAM).  The suspect was located and arrested.  The suspect was conveyed to jail for the outstanding warrant.

6) NORTH: Mental Health Conveyance – 4:53 p.m.  Officers responded to a convenience store on Northport Dr for a subject (47-year-old AAM) who locked himself in a restroom.  The subject was contacted and he admitted to taking a bottle of pills.  The subject was conveyed to a local hospital where he was voluntarily admitted.  The subject was left in the care of medical staff.

7) SOUTH: Domestic Disturbance – 6:47 p.m.  Officers responded to Moorland Rd for a domestic disturbance between two subjects (25-year-old AAM victim and 20-year-old WF suspect).  The victim and suspect have a child-in-common.  The victim and suspect got into a verbal argument.  The victim attempted to leave the residence and the suspect punched him in the head.  The suspect swallowed a large quantity of prescription medication.  The suspect was conveyed to a local hospital for an evaluation.  After receiving a medical clearance, the suspect was arrested and conveyed to jail for domestic disorderly conduct.

8) WEST: Adult Arrested Person – 11:59 p.m.  Officers responded to Adderbury Ln for a disturbance among several individuals.  A 32-year-old AAF and a 38-year-old AAM have an on-again, off-again relationship.  The two are present together when a third individual became upset.  The 32-year-old female subject/suspect reported she was assaulted by multiple subjects, yet she had no visible injuries.  There were conflicting explanations/stories for what occurring.  The 38-year-old AAM suspect had an outstanding warrant and he was arrested.  The 32-year-old AAF was cited and released for trespassing.  Investigation continuing.

9) NORTH: Information/Residential Burglary – 3:35 a.m.  Officers responded to Commercial Ave where a victim (45-year-old WF) woke up to find an unknown subject/suspect (AAM) in her home.  The suspect demanded cash and ATM card from the victim.  The suspect fled with items from the home (ATM, cash).  K9 track conducted.  Investigation continuing.