On the left is one dose of Heroin and on the right is one lethal dose of Fentanyl.  As you can see, it is disturbing that an increasing amount of the heroin being introduced into our market has Fentanyl.  Our Department has sounded the alarm early and often with respect to the epidemic levels of overdose activity; many of which have resulted in death. 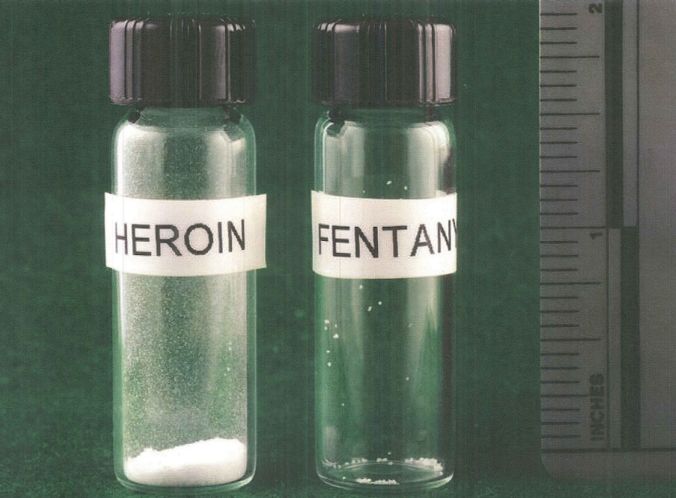 To further break down the 527 calls for service for the past 24-hours this is how the calls came in per district: Central (89), East (101), Midtown (70), North (66), South (51), West (85), and Other (65).  Other=these are calls for service that either do not have a sector listed or the sector is not in the City.  For example, if one of our officers assists another law enforcement agency, their sector is not listed in our districts so therefore it is listed under "other".

1) MIDTOWN: Check Person – 12:16pm. Officers responded to the 200 block of S Park St for a subject (53-year-old AAF) who was behaving erratically. The subject was placed under protective custody and conveyed to the hospital for evaluation.

2) SOUTH: Injured Person – 2:02pm. Officers responded to Olin Ave at John Nolen Dr for a report of a suicidal subject (12-year-old WF) who had fled from a healthcare facility and climbed a tree to get away from staff. While waiting for Madison Fire to arrive with a ladder, the tree branches gave way and the subject fell approximately 25 feet to the ground. The subject was conveyed to the hospital with non-life threatening injuries. Investigation continuing.

3) EAST: Adult Arrested Person – 2:36pm. While on a separate call for service, an officer spotted a vehicle in the 3100 block of E Washington Ave occupied by a wanted suspect (33-year-old AAM) from a prior incident. A K9 sniff and search of the vehicle yielded drug paraphernalia, as well as numerous phones and wallets. The suspect was arrested on outstanding warrants and taken to jail. A second suspect (31-year-old AAM) was arrested for possession of drug paraphernalia. Investigation continuing.

4) NORTH: Stolen Auto – 4:31pm. Officers responded to the area of Packers Ave and Northport Dr for a report of a stolen auto/traffic crash. Officers learned that a stolen vehicle was chasing a second stolen vehicle on Packers Ave before ramming the second vehicle and causing it to crash. The first vehicle then crashed into the rear of a law enforcement vehicle belonging to a different agency. All occupants of the stolen vehicles fled on foot. Investigation continuing.

5) WEST: Domestic Disturbance – 7:18pm. Officers responded to the 7100 block of Tree Ln for a threats complaint. The victim (31-year-old AAF) reported that she had been in a verbal argument with her boyfriend (32-year-old AAM) over the phone and that the suspect had made threats to physically harm her. The victim also reported that the suspect drove to her location and made additional threats to her in person. The suspect was arrested on charges of domestic disorderly conduct and resisting arrest.

6) MIDTOWN: Conveyance-Protective Custody – 10:03pm. Officers responded to Hilltop Dr for a report of a suicidal subject (50-year-old WM) armed with a knife. Officers contacted the subject and took him into protective custody. He was then transported to Detox.

7) CENTRAL: Burglary-Residential – 10:10pm. Officers responded to the 500 block of Conklin Pl for a report of multiple subjects entering the building through a ground floor window. Officers located two subjects in the area and arrested one (16-year-old AAM) on a charge of possession of drug paraphernalia. During a search incident to arrest, the suspect's backpack was found to contain items that were possibly taken from the Conklin Pl address. Investigation continuing.

8) EAST: Shots Fired – 10:24pm. Officers responded to the 2900 block of Hermina St after multiple callers reported hearing four to five gunshots. The area was searched and no evidence of shots fired was located. Investigation continuing.

9) MIDTOWN: Overdose – 10:27pm. Officers responded to Craig Avenue for a report of an overdose. The suspect (41-year-old WF) was found to be unconscious inside the residence after an apparent overdose. One of the residents/friend to the suspect administered naloxone prior to police arrival and revived her. The suspect admitted to injecting heroin and was given a citation for possession of heroin and paperwork pertaining to the MARI program.

10) CENTRAL: Check Property/Shots Fired – 10:44pm. Officers responded to the 300 block of W Washington Ave for a single report of shots fired in the area. Capitol PD officers were in the area at the time of the call and reported that they had not heard any shots. No evidence of shots fired was located.

11) MIDTOWN: Armed Robbery – 10:44pm. Officers responded to the Capital Petro Mart at 4601 Verona Rd for an attempted armed robbery. Employees reported that the suspect (25 to 29-year-old AAM) entered the store and demanded money while pointing a handgun at the clerk. Ultimately, nothing was taken and the suspect fled the scene. See the completed press release for further information and updates. Investigation continuing.