To further break down the 491 calls for service for the past 24-hours, this is how the calls came in per district: Central (71), East (115), Midtown (87), North (79), South (50), West (55), and Other (42).  Other=these are calls for service that either do not have a sector listed or the sector is not in the City.  For example, if one of our officers assists another law enforcement agency, their sector is not listed in our districts so therefore it is listed under "other".

1) NORTH: Domestic Disturbance – 6:00 a.m.       Officers were dispatched for a report of a rolling domestic disturbance. The victim (24-year-old AAF) was a passenger in a vehicle driven by the suspect (29-year-old AAM). The victim was struck repeatedly by the suspect while they traveled from her job to their home. The suspect fled after the victim called police. Probable cause exists to charge the suspect on domestic-related charges of Battery and Disorderly Conduct. Investigation continuing.

2) NORTH: Death Investigation – 9:39 a.m.                  Officers responded to a residence on the north side after a neighbor called for a check welfare as she had not seen her neighbor in quite some time. Upon doing the welfare check, officers find that the subject (68-year-old WM) deceased. Nothing suspicious was observed on scene. The Medical Examiner's Office responded. Investigation continuing.

3) WEST: Missing Runaway/Juvenile – 11:00 a.m.                      Officers responded to Schroeder Rd to take a report of two missing juveniles. Both juveniles (12-year-old AAM and 13-year-old AAM) left their respective homes sometime during the evening of 5/20 and did not show up at school on 5/21. No mental health or other concerns were noted. Both were listed as missing in the appropriate databases. Investigation continuing.

4) MIDTOWN: Information/Child Abuse – 11:35 a.m.        Dane County Human Services (DCHS) called MPD for assistance in meeting with a juvenile who arrived at school with visible injuries. CPS notified. The victim's mother/suspect (34-year-old AAF) admitted to striking the victim with a belt and was subsequently arrested for Physical Abuse of a Child and taken to jail. The victim and her brother were placed with a family member and a safety plan was put in place. Investigation continuing.

5) NORTH: Arrested Person/Follow up on Battery – 5:22 p.m.       In follow up investigation for which there was probable cause, a suspect (16-year-old AAM) was arrested on charges of Battery and taken to JRC. Investigation continuing.

6) WEST: Drug Incident Overdose – 7:01 p.m.      Officers were dispatched to check on the welfare of a subject (22-year-old WF) who reported suicidal sentiments to a friend and had ingested a large quantity of medication. Officers met with the subject who voluntarily agreed to be transported to a local hospital for treatment and a mental health evaluation. Investigation continuing.

7) EAST: Weapons Offense – 9:16 p.m.                  Officers responded to an east side residential neighborhood for a report a disturbance where the suspect (27-year-old AAF) brandished a knife at the victim (27-year-old) in a dispute over belongings. The suspect was arrested on a domestic-related charge of Disorderly Conduct While Armed. Investigation continuing.

8) NORTH: Death Investigation – 11:15 p.m.         Officers were dispatched to a residence on Sherman Ave after a caller reported a subject (36-year-old WM) slumped over. Drug paraphernalia was observed on scene and it appears his death was a result of a heroin overdose. Investigation continuing.

9) EAST: Check Property – 1:32 a.m.                 Officers were dispatched to N Fair Oaks Ave at Chicago Ave after white flashes and loud bangs were observed that were a result of a power outage. MPD units checked and secured the area. MG&E notified.

**For those who may be interested in a facilitated conversation about law enforcement and trending issues of our day, a group known as SAFEDANE, Inc. will be sponsoring a forum on Thursday, 5/23, from 7:00 – 8:30 pm at the Fitchburg Public Library, located at 5530 Lacy Rd in Fitchburg. This forum is designed to be driven by the questions arising from constituent inquires. 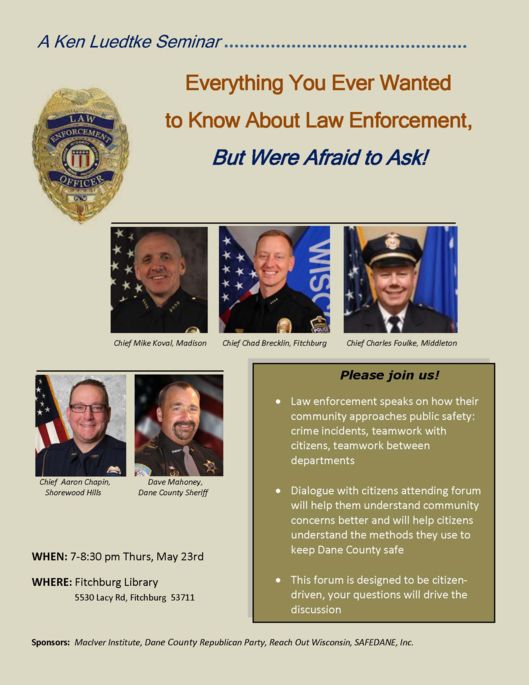