In 1962, President Kennedy designated May 15th as Peace Officers Memorial Day and the week in which that date falls as Police Week.  The proclamation acknowledged the danger faced by police officers and sought to recognize the sacrifices made by law enforcement for our communities.  The risks faced by officers are all too real; last year, 135 law enforcement officers were killed in the line of duty in the United States.  Over the last decade, more than 1,600 officers have died in the line of duty.  That's an average of one line of duty police death every 54 hours.  So far in 2020, 43 officers have died in the line of duty.  And these numbers don't include the thousands of non-fatal physical injuries sustained by officers or the trauma and emotional stress that police endure on a daily basis.

If 2020 was like prior years, a ceremony would take place at the State Capitol on the Friday of police week. MPD would join law enforcement representatives from across Wisconsin to recognize law enforcement's dedication and to honor officers who have died in the line of duty.  Some MPD officers would also likely travel to Washington, D.C. to take part in police week activities at the National Law Enforcement Officers Memorial.  Of course, 2020 is not like prior years.  The COVID-19 pandemic has impacted most aspects of our daily lives, and we will not be able to honor fallen officers as we have previously.

I am personally grateful for the dedication and commitment that members of the Madison Police Department demonstrate every day in service to our community.  MPD officers – like those of agencies across the state and nation – continue their work, providing safety and security to the public.  They do this facing not only "traditional" risks to their safety, but while also potentially being exposed to the COVID-19 virus. I encourage members of the community to visit (when it is safe to do so) the Wisconsin Law Enforcement Memorial (on the State Capitol grounds) or even the National Law Enforcement Officers Memorial.  The names etched into those structures are a sobering reminder of the perils faced by officers as they serve the public. 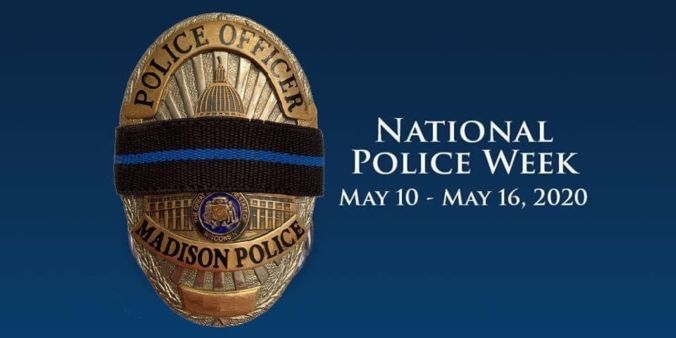 MIDTOWN: Domestic Disturbance –  6:51 a.m.  Officers responded to a residence for a report of a disturbance between two subjects (female victim and 23-year-old male suspect).  The suspect strangled the victim.  The victim's juvenile son attempted to intervene to protect his mom.  The suspect destroyed the residence.  The suspect was taken into custody and charged with numerous domestic-related charges.

MIDTOWN: Intoxicated Driver – 1:30 p.m.  Officers came across a driver/suspect (50-year-old male) passed out in a vehicle near the intersection of Regent/Park St.  Alcohol was observed in plain view in the vehicle.  The suspect was woken up and field tests were administered, which he failed.  The suspect was charged with operating a motor vehicle while under the influence (1st offense) and possession of open intoxicants.  The suspect was released to a responsible party.

EAST: Adult Arrested Person – 2:24 p.m.  Officers responded to the Howard Johnson Plaza Hotel on E. Washington Ave for a suspect (45-year-old female) causing a disturbance.  The suspect was issued a citation for disorderly conduct and ordered to leave the premises, which she did.  The suspect returned to the hotel and the suspect was re-contacted by officers.  The suspect was subsequently arrested for trespassing.

MIDTOWN: Adult Arrested Person – 2:42 p.m.  Officers responded to a hotel reference a female subject refusing to leave the premises.  The subject was contacted and concerns were identified about possible human trafficking.  A suspect (31-year-old male) was identified and contacted.  The suspect was arrested on a probation hold.  The female was conveyed to a local hospital for an evaluation.  The Department of Human Services plugged in.  An emergency detention was sought and the female was conveyed to Winnebago.  Additional follow-up necessary.  Investigation continuing.

NORTH: Weapons Offense – 8:45 p.m.  Officers responded to a report of a shot being fired at an occupied vehicle.  The suspect vehicle was located and a traffic stop by conducted.   The driver/suspect (26-year-old male) was arrested.  A gun was located in the vehicle. A shell casing was recovered from the original scene.  No injuries reported.  The suspect was charged with 1st degree recklessly endangering safety and carrying a concealed weapon.

WEST: Check Person – 10:21 p.m.  Officers responded to Excelsior Drive for a report of a subject/suspect (male) causing a disturbance.   Officers contacted the suspect who was not cooperative.  An ECD was deployed and necessary to get the suspect into custody.  The suspect was conveyed to a local hospital where he was admitted due to health complications from his earlier use of meth.  The suspect was provided with several citations and left in the care of medical staff.

MIDTOWN: Traffic Incident – 10:41 p.m.  Officers responded to the intersection of Odana Rd/S. Gammon Rd for a crash.  The suspect driver (23-year-old female) failed to stop for a flashing red light and struck a metro bus in the intersection.  The bus driver sustained minor injuries which required stitches.  The suspect was cited for operating a motor vehicle while under the influence causing injury, failure to obey signal, operating while suspended and imprudent speed/failure to control speed.

WEST: Check Person – 1:41 a.m.  Officers responded to a local hospital and consulted with Journey Mental Health regarding a subject who made threatening statements.   The subject was ultimately conveyed to Winnebago.

NORTH: Domestic Disturbance – 7:00 a.m.  Officers responded to a residence for a disturbance between two subjects (38-year-old female and 55-year-old male).  Both subjects had visible injuries.  Both subjects gave conflicting statements.  Decision was made to arrest both subjects for their part in the disturbance.  The suspects were charged with domestic battery.