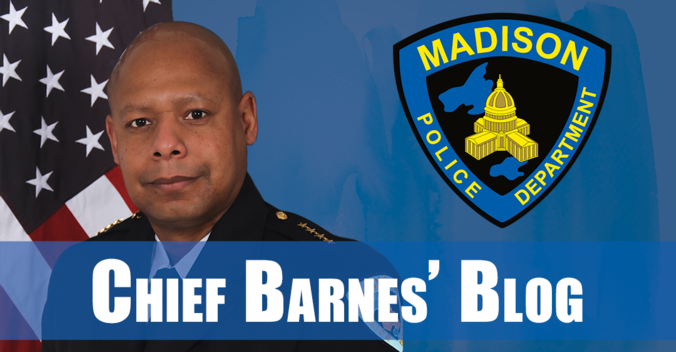 A message from Chief Barnes:

So who is our new Chief?  Here is some information about him –

Shon F. Barnes was hired as Madison Police Department's Chief of Police by the Police and Fire Commission (PFC) in February of 2021. Chief Barnes is a nationally recognized leader in crime reduction and community-police relations. He was previously the Director of Training and Professional Development for the Civilian Office of Police Accountability in Chicago, Illinois. Chief Barnes was the Deputy Chief of Police in Salisbury, North Carolina (2017-2020) and a Captain with the Greensboro Police Department (NC) where he began his career as a patrol officer in the fall of 2000. Chief Barnes was honored as a National Institute of Justice, LEADS Scholar, for using innovative technology to reduce crime and is a council member on the National Police Foundation's Council on Policing Reforms and Race. The council is a nonpartisan initiative which uses research and evidence to consider and offer recommendations to resolve some of the most pressing issues regarding police reform. Throughout his career Chief Barnes has implemented Neighborhood Oriented Policing which focuses on smaller police beat response, police neighborhood ownership, and community engagement at levels within the organization.

Chief Barnes is married to Dr. Stephanie Dance-Barnes and the two have three children Ashlee, Aeiden, and Addison. My philosophy as it relates to policing simply states, "Community Policing should be neighborhood oriented, community focused (business and residential), problem oriented, and based on the most current empirical research available to quickly reduce crime and improve citizens' satisfaction with police services."

The information provided below about some of the calls officers responded to (Friday morning to Monday morning) is derived from notes provided by MPD Officers-In-Charge (OIC) at the end of their shifts. Most narratives represent early and preliminary information that was gathered by an OIC from those in the field who were actively working cases. The OIC is sharing what they were being told, in the moment. In many instances, facts and circumstances, even the type of crime listed, can change as officers, detectives and investigators continue their work.

SOUTH: Check Person – 6:20 a.m.  Officers responded to a clinic where staff suspected a patient was under the influence of drugs.  Staff did not want the patient to drive so they contacted police.  Police transported the patient to her residence.

MIDTOWN: Drug Overdose – 7:53 a.m.  Officers responded to a residence where the suspect (36-year-old male) had overdosed.  MFD paramedics administered naloxone and transported the suspect to the hospital.  The suspect was cited for possession of drug paraphernalia.

CENTRAL: Bomb Threat – 9:27 a.m.  Officers responded to the Walgreens at 676 State St where an employee reported the suspect (48-year-old male) stated something about a bomb.  Officers placed the suspect into protective custody and eventually conveyed him to WMHI.

MIDTOWN: Stolen Auto – 12:02 p.m.  The victim reported he left his vehicle in the lot at a business with the keys in the vehicle when it was stolen.  The vehicle was listed as stolen and an ATL was aired.

EAST: Intoxicated Driver – 12:44 p.m.  Officers responded to the intersection of E Washington Ave and N Marquette St where the suspect (16-year-old male) crashed his vehicle into a snowbank.  The suspect was cited for OWI 1st offense and failure to control vehicle.

MIDTOWN: Mental Health Conveyance – 1:09 p.m.  Officers responded to St Mary's psychiatric unit to assist with moving a patient to a new location in the unit.

MIDTOWN: Check Person – 1:11 p.m.  The victim reported that the suspect (47-year-old male) bear hugged her from behind, making it difficult for her to breathe.  The suspect has a history of mental health issues.  Officers consulted with Journey Mental Health and the suspect was placed into protective custody and conveyed to Winnebago.  The suspect was charged with domestic disorderly conduct and strangulation.

EAST: Weapons Offense – 2:38 p.m.  Officers were dispatched to a report of shots fired in the 4200 block of Maher Ave. One subject was transported to an area hospital with serious injuries. One suspect was taken into police custody. Investigation continuing.  Incident report completed on MPD website.

MIDTOWN: Information – 4:21 p.m.  Dispatch received multiple reports of gunshots in the Seminole Hwy/beltline area.  The shots were determined to be from permitted hunters in the UW Arboretum where deer population control efforts were underway.

WEST: Domestic Disturbance – 5:24 p.m.  Officers responded to a residence where the suspect (17-year-old male) hit a family member with a chair.  The suspect also held a hammer to his neck and threatened to harm himself.  Officers arrested the suspect and charged him with domestic disorderly conduct while armed, trespass and battery.

NORTH: Disturbance – 9:52 p.m.  A subject (27-year-old male) reported his girlfriend punched him, pointed a gun at him and stole his car.  A witness reported seeing someone matching the description of this male subject running from the scene of a one-vehicle traffic crash.  Officers made contact with the male and female subjects involved in the reported disturbance.  Officers did not establish probable cause to charge the female subject with any crime.  The male subject may be cited for the hit and run crash.  Investigation continuing.

MIDTOWN: Check Person – 10:41 p.m.  A subject (16-year-old male) contacted dispatch and reported he was suicidal.  Officers made contact with the subject and his family members at their residence.  After consulting with Journey Mental Health, a safety plan was put in place and the subject was left in the care of his family.

EAST: Drug Overdose – 1:12 a.m.  Officers responded to the GrandStay Hotel at 5317 High Crossing Blvd for a suspect (32-year-old male) who overdosed.  MFD paramedics administered naloxone and transported the suspect to the hospital.  Officers made contact with a second suspect (62-year-old male) in the parking lot.  This suspect was arrested and cited for possession of drug paraphernalia.

SOUTH: Death Investigation – 7:16 a.m.  Officers responded to a residence where a subject (33-year-old male) was found deceased of a possible opiate overdose.  Nothing suspicious on scene.  Medical examiner responded.

NORTH: Disturbance – 8:02 a.m.  The victim reported that a known suspect (35-year-old female) was banging on her door while armed with a knife.  Officers arrested the suspect and charged her with disorderly conduct while armed and battery.

CENTRAL: Check Person – 9:12 a.m.  The mother of a subject (17-year-old male) reported her son was making suicidal statements.  Officers made contact with the family at an area hospital and consulted with Journey Mental Health.  The subject was subsequently conveyed to Winnebago.

MIDTOWN: Domestic Disturbance – 3:32 p.m.  Officers responded to a disturbance between two subjects (female victim and 23-year-old male suspect).  The suspect was arrested/charged with domestic battery, disorderly conduct and intimidation of a victim.

WEST: Disturbance – 3:47 p.m.  Officers responded to a business on Watts Rd for a subject/suspect (32-year-old male) threatening customers and staff.  The suspect was not cooperative with officers who arrived on scene.  The suspect was arrested/charged with disorderly conduct, threats to law enforcement, resisting, battery to medical personnel, carrying a concealed knife, felony bail jumping and a probation violation.  Incident Report on MPD's website completed.

NORTH: Check Person – 10:31 a.m.  Officers received a request to check the welfare of a subject.  The subject was contacted who reported a domestic disturbance with a known suspect, who was not on scene.  Investigation continuing.

EAST: Domestic Disturbance – 1:02 p.m.  Officers responded to a disturbance involving a 22-year-old female suspect.  The suspect was arrested/charged with domestic disorderly conduct, domestic criminal damage to property and physical abuse to a child.

NORTH: Domestic Disturbance - 1:35 a.m.  Officers responded to a report of a disturbance invovling a gun.  The involved subjects were contacted and found to both be intoxicated.  A gun was not found to be involved.  No consistent explanation able to be provided.  No probable cause developed for any charges.  The subjects were separated for the evening.  Officers disengaged.

WEST: Battery - 1:51 a.m.  Officers met with a victim who reported being assaulted by several subjects.  The details provided by the victim were a bit unclear and convoluted.  The victim obtained medical assistance.  Investigation continuing.