Today, the 60th recruiting class of the MPD graduates!  This class took the oath-of-office on September 11, 2017.  Since then, they have been immersed in our in-house academy and field training program.  Together, our 27 recruits worked through approximately 890 hours of classroom training where they have been given the necessary training, skills and tools to become guardians for our community.  From the time of hire, each recruit serves an 18-month probationary period.

Once the classroom portion of the academy was completed, each of our recruits was matched with a Field Training Officer (FTO) for approximately three-months.  During field training, our recruits put the training they have been taught into action in order to resolve and find the best possible resolutions for real life situations.  In early June, our recruits went to solo patrol!  Today, marks a memorable moment as they graduate.  Congratulations to them all – we are so proud of each and every one of them for the caring, character, commitment, competence and collegiality that they have displayed each and every day.

Photo from their swearing-in ceremony in September: 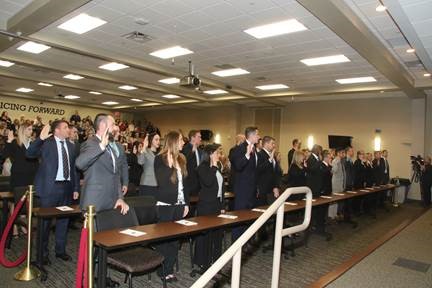 To further break down the 563 calls for service for the past 24-hours this is how the calls came in per district: Central (102), East (82), Midtown (93), North (76), South (63), West (120), and Other (27).  Other=these are calls for service that either do not have a sector listed or the sector is not in the City.  For example, if one of our officers assists another law enforcement agency, their sector is not listed in our districts so therefore it is listed under "other".

1) WEST: Domestic Disturbance – 9:35 a.m.  Officers responded to Schroeder Rd for a domestic disturbance between two subjects (29-year-old AAF victim and 33-year-old AAM suspect).  The victim and suspect are in a relationship.  The suspect was not on scene when officers arrived.  The victim reported being kicked and spit at by the suspect.  The suspect also damaged the victim's vehicle.  Once located, the suspect will be arrested for domestic-related charges for disorderly conduct and criminal damage to property.  Investigation continuing.

2) NORTH: Adult Arrested Person – 11:33 a.m.  At the request of Department of Corrections (DOC), officers responded to a north side address to take a suspect into custody on a probation violation warrant.  The suspect (26-year-old WM) was arrested and conveyed to jail.

4) MIDTOWN: Death Investigation – 12:59 p.m.  Officers responded to a residence for a deceased subject (59-year-old WM).  Initial indicator for cause of death is a medical emergency/incident.  Medical Examiner's office responded.  Nothing suspicious on scene.  Investigation continuing.

5) CENTRAL: Domestic Disturbance – 2:27 p.m.  Officers responded to W. Main St for a domestic disturbance between two subjects (26-year-old AAF victim and 28-year-old AAM suspect).  The suspect struck the victim in the face.  The suspect was arrested for domestic-related charges of disorderly conduct and obstructing (lied about his identity).  The suspect also had an outstanding warrant.

6) EAST: Disturbance – 3:12 p.m.  Officers were sent to the 4100 block of Monona Dr for a subject (24-year-old WM) refusing to leave and causing a disturbance.  Officers had been called regarding the same subject previously.  The subject was cited for disorderly conduct and conveyed to jail to post due to his continued behavior.

7) NORTH: Crash/Property Damage – 3:20 p.m.  Officers observed a wanted subject/suspect (19-year-old AAM) in the 1800 block of Northport Dr.  Contact was attempted and the suspect fled in a vehicle.  While fleeing, the suspect struck an occupied squad car. No injuries were sustained by the officer.  Suspect at-large.  Investigation continuing.

8) NORTH: Weapons Offense – 3:26 p.m.  Officers responded to a weapons offense that reportedly took place on Dwight Drive.  The female victim (23-year-old AAF) was walking on Dwight Dr when 3 subjects (AAMs) in a vehicle began to "cat call" her.  The victim told them to leave her alone and they left the area, only to return a short time later where they continued to harass the victim.  The victim's boyfriend (30-year-old AAM) was with the victim at this time and one of the suspects began to chase them.  The female victim reported that the suspect had a gun.  The male victim did not notice a gun.  Suspects at-large.  No injuries reported.  Investigation continuing.

9) WEST: Stolen Auto – 9:31 p.m.  Officers located an unoccupied vehicle (reported to be stolen) on Gammon Rd.  A subject approached the investigating officers and volunteered that he was a passenger in the suspect/stolen vehicle.  The subject/suspect (18-year-old AAM) refused to provide information about who else was in the vehicle with him.  The suspect was arrested.  Charges pending.  Investigation continuing.

10) MIDTOWN: Check Property – 12:06 a.m.  Officers responded to the 600 block of Piper for a report of shots fired.  No evidence of shots fired located.  Additional canvassing of the area may be necessary during daylight hours.  Investigation continuing.

11) MIDTOWN: Residential Burglary – 4:40 a.m.  Officers responded to a residence where a homeowner woke up to find someone in their home.  The suspect fled when confronted. The suspect cut a screen to gain entry.  Investigation continuing.