Yesterday, we talked about our K9 partners.   Today, let's learn more about our other four-legged partners – horses! Our Mounted Patrol Unit currently has two full-time officers, four part-time officers and one Sergeant.  And you can't forget about the horses – we currently have six on our roster (Bubba, Chevy, Cooper, Doc B, Torres and Leo).

Just like with our K9s and the Capital K9s board, our mounted patrol unit is supported/financed through a not-for-profit organization "The Friends of the Madison Mounted Horse Patrol."  The organization is made up of volunteers whose primary role is to assist the team through financial support generated through community outreach.  The goal in 2017 was to establish a sponsor for each horse and this goal was met!  All six of our horses are sponsored by community members who donate a $5,000 annual donation per horse.

Our horses live and train at the Horse First Farm in Brooklyn.  During the "regular" season, our officers train with the horses once a month (and twice a month during the "off-season.").  We use confidence-based training, not fear-based.  We work to a level of horse and rider confidence built through time and patience.

I am deeply appreciative of the efforts of The Friends of the Madison Mounted Horse Patrol for their on-going dedication and efforts to support our Mounted Patrol Unit.  If you want to learn more about our mounted unit or how you make a contribution, please check out the following website: http://www.madisonmounted.org/index.html 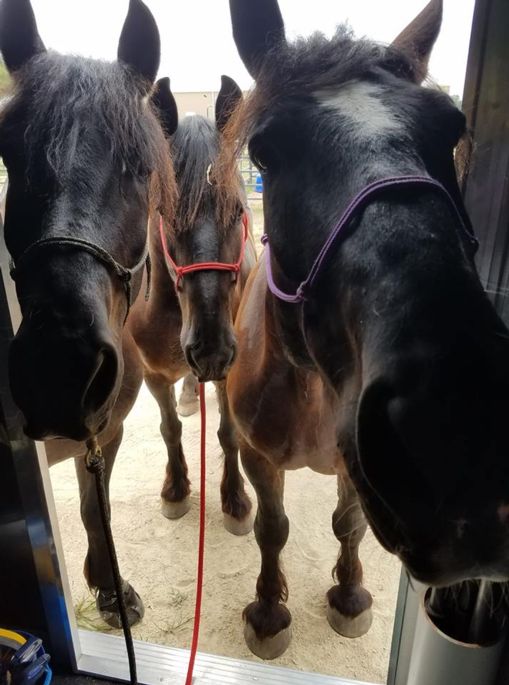 To further break down the 583 calls for service for the past 24-hours this is how the calls came in per district: Central (105), East (87), Midtown (86), North (79), South (58), West (76), and Other (92).  Other=these are calls for service that either do not have a sector listed or the sector is not in the City.  For example, if one of our officers assists another law enforcement agency, their sector is not listed in our districts so therefore it is listed under "other".

1) MIDTOWN: Residential Burglaries – 3:30 a.m.  Officers responded to three similar calls regarding residential burglaries in the Hammersley Ave/Larkin St/Wyota Ave area.  A screen door was cut at one residence, and when approached by the homeowner, the suspect ran away.  A set of keys was removed from a second home.  Entry was attempted through a garage door at a third residence.  Investigations continuing.    * These were late calls that did not make the previous 24-hour cycle call notes due to officers being involved at the scenes and reports from the field were not yet typed.

2) CENTRAL: Damage to Property – 6:54 a.m.  Officers responded to W. Doty St where a witness observed the suspect (30-year-old WM) damage multiple windows.  The suspect is known to the victim (74-year-old WM).  The suspect was observed later in the morning and stopped by officers.  The suspect initially squared off in a fighting stance with officers but after verbal commands were given, he was taken into custody without incident.  The suspect was arrested for disorderly conduct, criminal damage to property and a parole violation.

3) EAST: Mental Health Conveyance – 9:09 a.m.  Officers responded to a chapter 51 (mental health order) return to Winnebago for a 60-year-old WM subject.  The subject is in a holding pattern for transport to Winnebago until a medical clearance is obtained from a local hospital.  Investigation continuing.

5) EAST: Juvenile Arrest – 8:20 p.m.  Officers responded to an east side residence for a disturbance between two subjects (36-year-old WF victim and 16-year-old UF suspect).  The victim is the mother of the suspect.  The suspect hit her mother in the face which left a visible mark.  The suspect was arrested for battery but first conveyed to a local hospital due to her having suicidal thoughts.  Investigation continuing.

6) NORTH: Crash – 10:47 p.m.  Officers responded to the 1800 block of E. Washington Ave for a roll-over crash.  The driver/suspect (22-year-old WM) was inbound on E. Washington at First St traveling at a high rate of speed.  The suspect clipped another vehicle which caused his own vehicle to roll.  No injuries reported.  The suspect was cited for failure to maintain control and an expired license plate.

7) MIDTOWN: Adult Arrested Person – 11:08 p.m.  Officers responded to a retail store on Hilldale Way for a report of a subject (34-year-old WM) "huffing" in the bathroom.  The subject was contacted by police and arrested for abuse of hazardous substances.

9) NORTH: Armed Robbery – 2:19 a.m.  Officers met with a victim (56-year-old AAM) who reported being robbed in the 2600 block of E. Washington Ave as he was walking home.  The victim said two suspects (AAMs) were involved and one had a knife.  The victim reported being hit with what he believes was a pipe.  The suspects fled with his wallet/cash.  The knife was located and collected as evidence.  The victim was transported to a local hospital for non-life threatening injuries.  Press release completed.  Investigation continuing.

10) CENTRAL: Information/Check Person – 2:53 a.m.  Officers made contact with a 20-year-old WF who recalls being out with friends drinking on State St and then not recalling a lot of details about the night.  The subject also reported waking up in an alley.  The victim had very sparse info.  The scene could not be located.  Investigation continuing.