Where did these incidents occur per district in September?

In September, there were 5 reports of shots fired that included property damage (50 year-to-date).  There were 5 subjects struck by gunfire (20 year-to-date).  Two of these incidents resulted in death (determined to be a domestic-related murder-suicide).  Arrests have been made in two of the three other incidents where subjects were struck by gunfire.  The shooting that occurred on Cottage Grove Rd is still an active investigation.

**The provided stats are based upon the best data available at the time of publication.

Finally, before we get into the calls for service, our very own, Police Officer Jodi Nelson, recently boxed in the 2018 Battle of the Badges: "The Fight for Autism" competition in Racine.  The recipients of this year's competition were Autism Solutions and Therapeutic Riding Stable.  Officer Nelson battled against a Fire Fighter from Somers, Wisconsin and won!  We are so proud of her and for this event which helps children with autism.  The funds raised during this wonderful event is closing in on approximately $50,000.  Congratulations Officer Nelson! 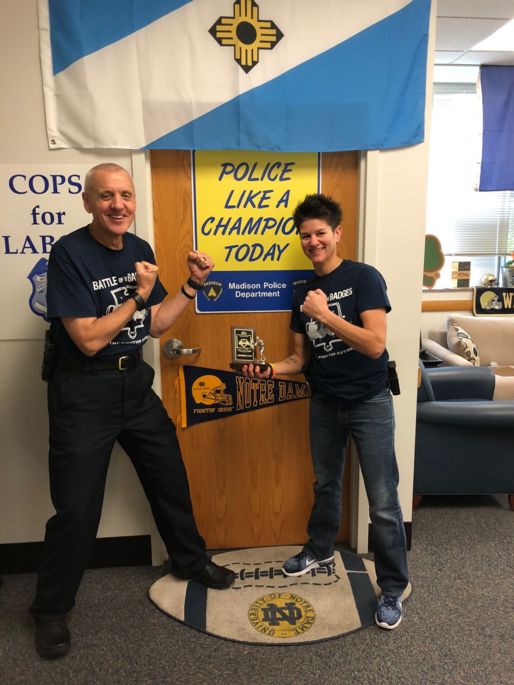 To further break down the 439 calls for service for the past 24-hours this is how the calls came in per district: Central (75), East (104), Midtown (64), North (67), South (44), West (54), and Other (31).  Other=these are calls for service that either do not have a sector listed or the sector is not in the City.  For example, if one of our officers assists another law enforcement agency, their sector is not listed in our districts so therefore it is listed under "other".

1) WEST:  Recovered Stolen Auto – 8:14 a.m.  Officers responded to Sauk Creek Circle reference an occupied vehicle that had been parked on the street and running for 2-3 hours.  The vehicle was determined to be stolen earlier this month.  The occupants, who were asleep when officers arrived, woke up when a squad siren sounded which led to them fleeing the area in the vehicle (stop strips had been placed in front and back of the vehicle).  The vehicle's tires deflated.  The vehicle was located unoccupied on Grand Canyon Dr.  The registered owner of the vehicle was notified.  Investigation continuing.

2) NORTH:  Missing/Runaway Juvenile – 9:04 a.m.  Officers responded to a report of a missing/runaway juvenile (17-year-old AAF).  Areas checked.  No safety concerns identified for the juvenile.  The juvenile was entered as missing/runaway in the appropriate databases.  Investigation continuing.

3) EAST:  Death Investigation – 9:15 a.m.  Officers responded to an east side residence for a deceased subject (41-year-old WF).  The decedent had a history of opiate addiction.  Drug paraphernalia was found in the home.  Medical Examiner's office responded.  Investigation continuing.

5) EAST:  Adult Arrested Person – 10:09 a.m.  Officers responded to the Walmart parking lot on Nakoosa Trail where a victim (WF) located her vehicle that had been stolen this past weekend.  A suspect (23-year-old AAM) was identified and contacted inside the store.  The suspect was arrested for operating a motor vehicle without consent and a felony parole warrant.

6) EAST:  Disturbance – 11:49 a.m.  While an officer was investigating a crash in the parking lot at La Follette High School, a subject/suspect (17-year-old AAM) became "very animated and threatened the other driver."  The officer attempted to diffuse the situation.  The suspect sped through the lot in a reckless manner, came back and threatened the officer.  Other officers responded to the area to assist.  The suspect was arrested for disorderly conduct (2 counts), reckless driving and operating after suspension.

7) WEST:  Check Person – 4:37 p.m.  Officers responded to a request to check the welfare of a subject (28-year-old AAM) and his son (1-year-old AAM).  The subject and his son were located.  The child was reunited and left in the care of his mother.  No further police action was deemed necessary.

8) WEST:  Check Person – 5:30 p.m.  Officers responded to Maple Valley Drive to check the welfare of a subject (33-year-old WM) "running around screaming and pulling his pants down."  The subject was conveyed to a local hospital for an evaluation.  Officers suspected the subject to be in an excited delirium state.  Upon receiving a medical clearance, the subject was arrested for disorderly conduct and felony bail jumping.  Investigation continuing.

9) EAST:  Missing/Runaway Juvenile – 5:55 p.m.  Officers received a report of a missing/runaway juvenile (14-year-old AAF).  Attempt to locate aired.  The juvenile was listed as missing/runaway in the appropriate databases.  Investigation continuing.

10) CENTRAL:  Domestic Disturbance – 6:59 p.m.   Officers responded to Fordem Ave for a domestic disturbance between two subjects (18-year-old AAM victim and 18-year-old AAF suspect).   The victim reported being pepper sprayed by the suspect (the mother of his child).  The suspect was not on scene when officers arrived.  Once located, the suspect will be charged with domestic disorderly conduct.  Investigation continuing.

11) CENTRAL:  Assist MFD/Crash – 7:27 p.m.  Officers responded to assist MFD with a vehicle fire, as a result of a crash, in the 600 block of Williamson St.  Officers assisted with traffic control.  MG&E responded due to traffic lights out.  No charges have been substantiated at this time.  Investigation continuing.

12) NORTH:  Weapons Offense – 12:14 a.m.  Officers responded to a local hospital after two subjects arrived with blood on them and one subject had a stab wound.  The victim (48-year-old WM) reported that the other male subject with him (28-year-old WM) stabbed him.  Both subjects left the hospital before police arrived.  Areas checked and they were not located.  Investigation continuing.

13) SOUTH:  Intoxicated Driver – 12:38 a.m.  Officers responded to Fish Hatchery Rd/St. Park St for a report of a crash.  Officers contacted the driver/suspect (48-year-old AAM) who was found to be under the influence (no crash or injuries located).  The suspect was arrested for operating a motor vehicle while intoxicated, possession of drug paraphernalia and a probation hold.

14) EAST:  Domestic Disturbance – 4:00 a.m.  Officers responded to Macarthur Rd for a domestic disturbance between two subjects (18-year-old AAF and 19-year-old AAM).  The subjects are dating and got into a verbal argument.  The female claimed the male struck her on the forearm.  The male and his godmother/witness denied this occurred.  No injuries were observed.  No charges have been substantiated at this time.  Safety plan was developed.  Officers left the residence but were called back two additional times for ongoing issues.  Charges may be forthcoming.  Investigation continuing.