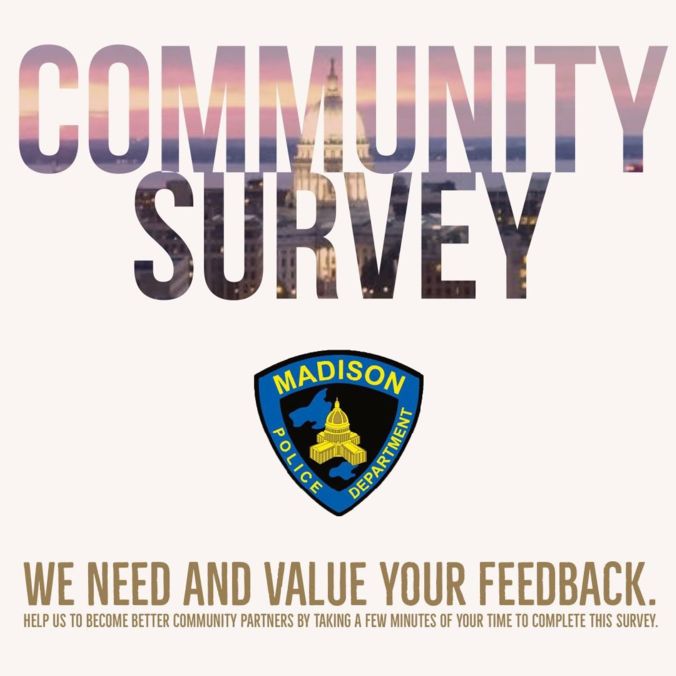 Today we have launched our community surveys!  We ask and hope that you will take a few minutes to complete the survey.  In order for the City of Madison Police Department to improve our service(s) to the community, we need and value your feedback! One of our core values is a commitment to continuous improvement and your insights will aid us as we consider ways in which we can modify or enhance our service model(s).

To further break down the 343 calls for service for the past 24-hours, this is how the calls came in per district: Central (58), East (86), Midtown (54), North (45), South (38), West (46), and Other (16).  Other=these are calls for service that either do not have a sector listed or the sector is not in the City.  For example, if one of our officers assists another law enforcement agency, their sector is not listed in our districts so therefore it is listed under "other".

1) MIDTOWN: Adult Arrested Person – 8:38 a.m.  Officers responded to Kendall Ave for a domestic disturbance between two subjects (27-year-old AAF victim and 30-year-old AAM suspect).  The victim reported being physically assaulted by the suspect.  The victim also stated the suspect refused to let her call 911.  The suspect was arrested for multiple domestic-related charges.

2) EAST: Stolen Auto – 9:10 a.m.  Officers responded to Pflaum Rd for a report of a stolen auto (that was left unlocked with the keys inside).  Attempt to locate aired.  The vehicle was listed as stolen in the appropriate databases.  Investigation continuing.

3) NORTH: Check Person – 9:31 a.m.  Officers responded to the 2500 block of E. Johnson St to check the welfare of a possible suicidal subject (27-year-old WM).  Officers met with the subject and there were no actions deemed necessary by the police at this time.

4) EAST: Battery – 10:30 a.m.  Officers responded to the 3500 block of E. Washington Ave for a fight in progress.  There were two victims (43-year-old WF and 43-year-old WM) identified and they both sustained visible injuries.  The suspect(s) have been partially identified but they were not on scene when officers arrived.  Investigation continuing.

5) EAST: Information/Sexual Assault of a Child – 12:19 p.m.  Child Protective Services contacted dispatch regarding a sexual assault of a child case they received.  The details are unknown at this time but the victim (12-year-old AM) and suspect (14-year-old AM) do not have contact.  Investigation continuing.

6) NORTH: Armed Robbery – 3:35 p.m.  Officers met with a subject/"victim" (19-year-old WM) who reported being robbed in the parking lot of Comfort Inn and Suites at 4822 E. Washington Ave early in the morning.  The victim reported that he arranged to sell drugs to a subject at 1am in the parking lot.  The victim stated three subjects/suspects (AAMs) met him and pointed guns at him.  The victim's phone, wallet and drugs were taken.  Incident Report on MPD's website completed.  Investigation continuing.

7) NORTH: Disturbance – 7:06 p.m.  Officers responded to Vera Court/School Rd for a disturbance between two subjects (22-year-old AAF and 24-year-old AAM).  The female subject made statements about being held hostage and being sexually assaulted by the male subject; neither of which could be corroborated.  The male subject was cooperative with officers and presented evidence refuting female's claims.  No charges have been substantiated at this time.  Investigation continuing.

8) EAST: Retail Theft – 7:38 p.m.  Officers responded to Walmart on Nakoosa Trail for an unwanted subject/suspect (31-year-old WF).  The suspect had previously stolen from the store.  Officers made contact with the suspect and she was cited for theft (2 counts – 1 of which was from a previous incident), possession of drug paraphernalia and possession of heroin.  The suspect was referred to the Madison Addiction Recovery Initiative (MARI) and released from the scene.

9) WEST: Crash/Injured Subject – 7:38 p.m.  Officers responded to S. Gammon Rd/Gammon Lane for a motor vehicle vs. pedestrian crash.  The pedestrian (36-year-old AAM) walked across several lanes of traffic intoxicated and was struck by a driver (16-year-old AM).  The pedestrian was conveyed to a local hospital with non-life threatening injuries.  The pedestrian was left in the care of medical staff.  A probation hold has been placed on the pedestrian.  The driver was cited for driving without a license.  Investigation continuing.

10) EAST: Intoxicated Driver – 8:46 p.m.  Officers responded to the area of N. Thompson Dr/Swanton for what was originally reported as a reckless driver.  A traffic stop was initiated and the driver/suspect (18-year-old AAM) purposefully crashed into a curb where two of the three occupants (including the driver) fled from the vehicle.  The driver/suspect and a second subject/suspect (18-year-old HM) were apprehended.  The driver/suspect was arrested for operating a motor vehicle while intoxicated (1st offense) and resisting arrest.  The HM suspect was arrested for resisting arrest and possession of marijuana.  The third subject, who stayed with the vehicle, was released from the scene.

11) EAST: Domestic Disturbance – 9:46 p.m.  Officers met with a victim (23-year-old WF) at a local hospital regarding a domestic disturbance she was reporting took place at an east side residence.  The victim reported being physically assaulted by her roommate/suspect (21-year-old WF).  It was also reported that the suspect's daughter (1-year-old) may have consumed a household cleaner.  The suspect was contacted via phone who denied anything was wrong with her child.  Poison Control and Child Protective Services contacted.  Probable cause was developed to arrest the suspect for domestic disorderly conduct.  Investigation continuing.

12) CENTRAL: Stalking Complaint – 2:13 a.m.  Officers responded to the State Street Campus Parking ramp for a stalking complaint.  The suspect (23-year-old WF) was identified as a previous employee of the business.  No specific threats have been made by the suspect but her overall behavior has been suspicious to the business/current employees.  Phone contact was made with the suspect who denied the allegations.  A stalking letter will be served upon the suspect.  Investigation continuing.