The City of Madison Police Department has more than 500 employees, and serves a population of about 243,000.  Yet as recently as 2004, the department had virtually no K9 capabilities.  While one K9 officer was assigned to the countywide drug unit, the Madison Police Department had no K9s regularly available to assist patrol personnel.  While the department had sought funding through the city budget to form a K9 unit previously, the requests had been denied due to the high start-up costs associated with forming a K9 unit.

So what changed in 2004?  A department member made contact with Boris Frank, a citizen experienced in non-profit building and fundraising. He supported the department's efforts to start a K9 unit.  Boris, with the assistance of a couple department members, formed a nonprofit organization – Capital K9's – that exists for the express purpose of funding the Madison Police Department K9 unit.  This model has been a success in other agencies; in fact, the Anchorage Police Department has funded its K9 unit through a nonprofit for years and served as the inspiration for the Madison Police Department to do the same.  Since 2004, Capital K9's has provided donations to the City of Madison to fund eleven K9 teams (four K9s have retired, seven K9 teams remain on active duty).   Virtually all of the costs of the MPD K9 unit – other than officer salaries – are funded by donations through Capital K9's.

Capital K9's (www.capitalk9s.org) uses a variety of fundraising strategies to support the MPD K9 unit.  In 2007, the group hosted the first annual "Dog Paddle," where Madison's municipal pool was opened for citizens to bring their dogs for a swim on the last day of the pool's season.  The event has grown every year since then.  This year the event is scheduled for September 7th at Goodman pool from 10am-4pm. The "K9 CSI Event" began last year, which offers the public an opportunity to view reenactments of actual cases and see the K9s in action. These events have been successful in raising funds for the K9 unit, and they have also given the public a real connection with the K9 teams.

Corporate/business, families, and individuals have become K9 sponsors and are an important part of the Capital K9's strategy.  Those who choose to sponsor a K9 team have the option to choose the name of the dog.  The sponsors maintain a connection with the K9 team throughout their career.

Since the inception of MPD's K9 unit almost ten years ago,  these highly trained K9s have proven to be a great benefit to the department and to the community.  They track missing persons, apprehend suspects and locate evidence and illegal drugs.  The unit currently has seven dogs (six K9 handlers..one handler has two K9s and works a blind dog or drug detection); five German Shepherds and two Belgian Malinois.  All but the one are dual-purpose, trained in narcotics detection and patrol work.  Five of the K9 teams are assigned to a patrol function, the sixth K9 team is assigned to the West district Community Policing Team. The K9 teams have tracked and located missing persons, apprehended dangerous suspects, and been responsible for the removal of a significant amount of illegal drugs and weapons from the community. Since 2010, MPD's K9 teams have handled more than 1,300 K9 requests annually.

The unit now obtains all new dogs from Tarheel Canine in North Carolina, where the new handler attends initial training.  Upon returning to Madison, new handlers continue with several weeks of additional training with Sergeant Boyd, the K9 unit's direct supervisor and trainer.  After this initial training is completed, all members of the unit attend two days of training per month, while also engaging in on-duty training regularly.

The Madison Police Department provides specialized scent specific tracking training to outside agencies.  Madison has helped train over fourty K9 teams from around the state of Wisconsin.

Most of the names of MPD's K9s have some significance.  Some of the names are selected by the sponsor of the team.
- K9s Johnny and Greg were the first K9 teams sponsored by Madison's WJJO radio station.
- K9 Gildon was sponsored by Veridian homes.
- K9 Martie is named after Animart, a local pet business located near East Town Mall.
- In 2010, MPD added two K9 teams, without sponsorships.  So, the unit set out to select names for the K9s that would have significance to the department and the community.  One of the new K9s was named "Slim," in honor of Lori Rappe – one of the original Capital K9's board members who died in 2009.  Naming K9 Slim honored Lori's contributions to Capital K9's and the MPD K9 unit, while also acknowledging the close connection between the department and the non-profit.  Officer Carren Corcoran handles Slim.
In 2010, Sal Giunta became the first living U.S. serviceman since the Vietnam War to receive the Congressional Medal of Honor.  Giunta was honored for his actions in Afghanistan on October 25, 2007, when his unit was ambushed.  During the firefight, Taliban fighters attempted to drag away an injured Army Sergeant – Josh Brennan.  Giunta assaulted the fighters and rescued Brennan, who later died from his injuries.  Josh Brennan's father – Mike Brennan – is a Madison Police Officer.   So, MPD honored Josh's memory by naming the other new dog joining the K9 unit in 2010 "Josh."   Officer Teresa McKenzie handles Josh.
- K9 Boris was named after Capital K9s founder and original board chair Boris Frank.  K9 Boris is a tenacious hard worker similar to his human counterpart...as anyone knowing Boris Frank will attest to!

The community continues to show strong support for Capital K9's and the MPD K9 unit.  Capital K9's continue to successfully raise funds, which will enable MPD to maintain the quality of its K9 unit and possibly expand in the years ahead.  Fundraising is a constant effort and in need of new support on a regular basis.  To get involved you can volunteer, become a sponsor, donate, or attend fundraising events.

For more information about the Madison Police K9 Unit and Capital K9s inquire into: 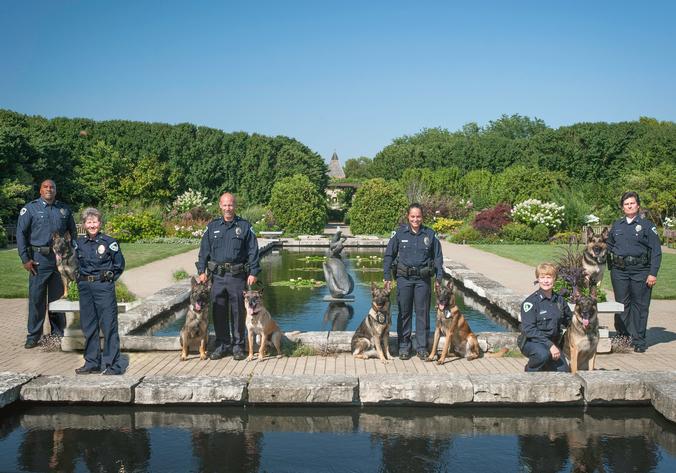 Information for this blog was provided and authored by Sgt. Christine Boyd.